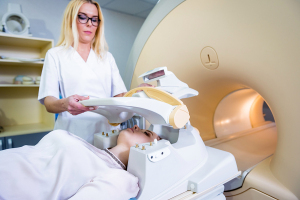 Patients must first undergo MR imaging before getting focused ultrasound, which is now FDA approved for Parkinson's disease
The FDA has nodded its head in approving the use of focused ultrasound for treating common symptoms found in Parkinson’s disease.

The technique requires no incisions into the skull and utilizes sound waves to address malfunctions in the brain circuitry that cause the symptoms. Doctors will apply MR imaging in real time before making any changes.

The authorization enables providers to perform incisionless brain surgery to treat problems with mobility, rigidity and involuntary movements (dyskinesias) and to potentially spare patients from undergoing invasive deep-brain surgeries, or when drugs prescribed to them no longer work.

"The approval of focused ultrasound pallidotomy will add another surgical treatment option for patients. As the disease progresses with more difficult symptoms, patients will have more options beyond medication to address their symptomatology. It is important to recognize that we still do not have a curative approach for this neurodegenerative disease," UVA Health neurosurgeon Dr. Jeff Elias, professor of neurological surgery who led UVA’s testing of the technology for treating Parkinson’s, told HCB News.

The decision by the FDA is an expansion of an initial approval in 2018 for the treatment of essential tremor, a common movement disorder. Elias and his colleagues have since that time set to work on developing MR-guided focused ultrasound as a commercially approved procedure. For their work, they have relied on Insightec’s Exablate Neuro focused ultrasound device, which provides an anatomical survey of the treatment area, patient-specific planning and real-time thermal monitoring during treatment.

Insurance plans are not likely to cover the method immediately, but it is seen as another option for these patients. Elias and his colleagues are also investigating its use for other conditions, from breast cancer to epilepsy to opening the blood-brain barrier to deliver treatments that were not possible before.

Opening the blood-brain barrier could allow for effective treatment of conditions like glioblastoma, a fatal brain tumor, they say. Research in 2018 showed that opening it with focused ultrasound could potentially close the therapy gap for treating Alzheimer's disease, cancer and stroke.

"This ultrasound technology involves focusing the energy to a deep seated, brain target. Some of these targets, like the globus pallidus, have complex anatomical shapes. Once we are able to contour the treatment to match the anatomic target, the effectiveness and the safety of the procedure will increase significantly," said Elias.

Researchers at Sunnybrook Health Sciences Centre in Toronto were able to safely open the BBB in six patients with mild to moderate Alzheimer’s disease. The aim of the phase I trial was to deliver chemotherapy to the rim of previously resected tumors, which is where 98% of recurrence occurs. Chang Gung Memorial Hospital in Taiwan, also at that time, investigated opening the BBB in patients with recurrent glioblastoma. It treated two in August 2018.