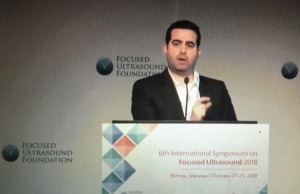 “The BBB is a huge obstacle in the delivery of brain therapeutics,” he said. “There may be effective drugs and agents for many neurodegenerative and other disorders, but we just can’t get them to the brain in sufficient concentrations to have a meaningful impact.”

There is currently a therapy gap for the most common and deadly diseases, including Alzheimer's, cancer and stroke. The field has advanced its ability to diagnose these illnesses in the last 20 to 30 years, but has not been able to advanced its care of these illnesses.

However, thanks to focused ultrasound that seems to be changing. At Sunnybrook, researchers have safely opened the BBB in six patients with mild to moderate Alzheimer’s disease, and that work is continuing to larger trials.

“We found that you can open the BBB repeatedly and reversibly — [the BBB] was closed the following morning and you can do it again a month later in a large volume,” said Lipsman.

Sunnybrook also launched a phase I trial to investigate the use of InSightec’s ExAblate MR-Guided Focused Ultrasound system for treating brain tumors. Their goal is to open the BBB to enhance the delivery of chemotherapy to the rim of previously resected tumors, which is where 98 percent of recurrence occurs.

To date, they have performed this procedure on five patients and found that it is safe to open the BBB in this patient population.

Chang Gung Memorial Hospital in Taiwan and NaviFUS Corporation have a study in the works that’s investigating the use of the NaviFUS System to open the BBB in patients with recurrent glioblastoma. The first two patients were treated in August and early results reveal that the BBB can be opened with this device as well.

Work is also underway in Paris to evaluate the use of Cathera’s SonoCloud Low Intensity Ultrasound device to open the BBB to treat recurrent glioblastoma with chemotherapy. Nineteen patients have been treated to date.

A team from the University of Alabama, University of Virginia Health System and Barrow Neurological Institute took focused ultrasound to a whole new level. The team demonstrated that it can open the BBB after ischemic stroke to delivery mitochondria, which are the factories of cells.

“Even in conditions where it was previously thought that we cannot really touch, focused ultrasound may play a profound role in delivering healthy things to the brain,” said Lipsman.

A little over a week ago, The University of Maryland School of Medicine became the first in the U.S. to treated a brain tumor patient with focused ultrasound. Dr. Graeme Woodworth, professor of neurosurgery at the university, reported that opening the BBB with focused ultrasound is safe and reversible in this patient population.

“Certainly these are our early days, but there is intense interest in improving every aspect of the process, including the technology,” said Lipsman. “Whether it’s Alzheimer’s, brain tumors or other indications, the earlier we intervene, we believe, the better chance we have at making a difference.”