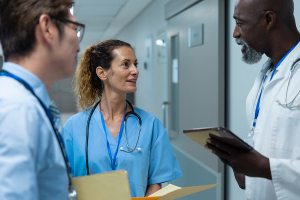 Male doctors earn $2 million more in cumulative pay than female physicians
Women doctors earn at least $2 million less than their male counterparts throughout a 40-year career, according to an analysis by the RAND Corporation.

In that time, male physicians earn an average of $8.3 million, while women make roughly $6.3 million. This is a nearly 25% difference, with reasons ranging from discrimination to childcare to now, COVID-19-related impacts.

The authors spoke to 80,000 physicians. Among them, men were more likely to become surgeons, while more women pursued careers in primary care. Accounting for different specialties in their calculations, along with types of practices and patient volume, the authors found pay differences in specialties to also be sizable, with surgeons making the highest at around $2.5 million, while primary care physicians made the lowest at nearly $920,000.

In addition, women were found to spend more time with patients, which reduces the volume of services and procedures they can bill for, according to The New York Times.

Dr. Christopher Whaley, a health economist for RAND and lead author of the study, says the pandemic has further added to these losses by causing women in medicine to take leave from their jobs to care for children or help out with household responsibilities. “This is probably going to accelerate physician burnout. And so that’s just going to further exacerbate these pay issues,” he told The Times.

Even before the pandemic, burnout was a major issue, with 42% of U.S. physicians reporting feeling burned out in January 2020 and almost 50% willing to take a pay cut if it meant better hours and more time with family and friends. Reasons spanned from the number of bureaucratic tasks to hours spent at work to lack of respect from bosses and colleagues.

In addition to facing these pressures, women also experience insufficient maternity leave, inadequate support for returning to work and often take on a disproportionate burden of raising children, according to the RAND Corporation survey.

Dr. Reshma Jagsi, a radiation oncologist and bioethicist at the University of Michigan School, told The Times that differences between men and women physicians are “likely manifestations of systemic bias or discrimination.” While not part of the report, she says that prior studies have shown that women face widespread bias when applying for jobs in medicine that were traditionally filled by men, and are less likely to receive big research grants or hold leadership positions.

In the study, salary gaps began at the start of a doctor’s career and continued to grow until around year 10 without recovering. And despite the fact that roughly the same number of women graduate from medical school as men, women only make up 36% of working physicians.

As the information was collected between 2014 and 2019, Whaley says the pay gap has probably widened. He adds, however, that the gap is narrowing and that policy changes may help further decrease it, such as more paid family leave, flexible scheduling and making salaries more transparent.

The study, he notes, did have limitations. Data on people identifying as nonbinary and transgender was not included and race was not specified among participants, despite having a strong influence on physician pay, according to prior research. Whaley says this is because race is “not systematically recorded really anywhere.” Individuals were also not followed over time to observe the real-time impact on women’s cumulative earnings.