More understanding of use of breast MR in cancer removal required 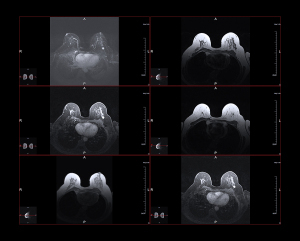 Breast MR was used to diagnose cancer in 20% of cases prior to surgery
While able to detect more cancers with breast MR, clinicians may not fully understand the appropriate use and impact of the exam when choosing to perform it, particularly before surgery.

Researchers at the University of Milan say that the application results in an increased number of mastectomies following the scan, which counteracts the trend in favor of breast conserving surgery. They also found that 20% of cases were designated as breast MR by default, meaning that MR was used to diagnose cancer, and that surgeons requested MR in 45% of cases.

They discuss their findings in the Multicenter International Prospective Analysis (MIPA) study, which assesses the clinical suitability of preoperative breast MR in patients with newly diagnosed breast cancer and clinical decision-making around its use.

Under the lead of professor Francesco Sardanelli, the researchers looked at data from 5,896 patients treated at 27 clinical centers worldwide. Comparing 2,441 patients who underwent MR to 2,763 who did not, they found patients in the MR group were often younger and more in pre/perimenopausal status. They also had denser breasts, a higher proportion of multifocal cancers diagnosed before MR, a higher proportion of cases of invasive lobular histopathology and a tumor size of 20 mm or larger (T2 or higher stage).

Usually, patients with higher mastectomy risks are referred for preoperative MR, say the authors, with about two thirds of mastectomies already chosen prior to the exam. This means that MR in those instances is being used as a confirmation tool. Additionally, there is a 9% additional mastectomy rate among these patients, but about a 3% reduction in reoperations as well. More women in the MR group had already planned to have a mastectomy before undergoing MR (22.4%) than those in the non-MR group (14.4%). Overall mastectomies, which included those as a second intervention, were 36.3% versus 18%.

Additionally, MR diagnosed breast cancer in 692 women. For more than one in five women, breast MR was used to plan surgery even though it was not performed for the intention of doing so. These could be deemed examples of preoperative breast MR by default, according to the authors. They have excluded these cases from the primary results and are currently conducting a specific analysis on them as a separate subgroup.

They hope that the findings of the MIPA study will better help tumor boards in appropriately determining the clinical use of preoperative MR in individual cases and that more information will be shared with patients to help them make more informed decisions.

The authors referred HCB News to the press release for information.

The findings were published in European Radiology.