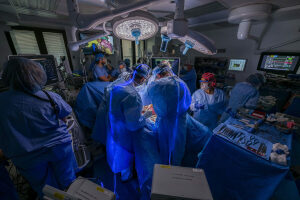 A rare and tricky heart surgery at Cleveland Clinic has removed a heart tumor — ultimately saving the life of a 26-week-old fetus.

The condition, an intrapericardial teratoma with fetal hydrops (fluid accumulation) evolving to fetal heart failure, has been little reported in the literature.

“Only one previous incidence of continued pregnancy and delivery after fetal intrapericardial teratoma resection is documented in the world’s medical literature,” Dr. Darrell Cass, director of Cleveland Clinic’s Fetal Surgery and Fetal Care Center said in a statement. “As far as we know, Cleveland Clinic is the second academic medical center in the world to have performed this fetal surgery successfully with continued pregnancy and delivery.”

The surgery took place in May. The baby, Rylan Harrison Drinnon was born on July 13 to Sam and Dave Drinnon. He was delivered near full term at 36 weeks. Mother and child are both doing well.

“I am very proud of our talented congenital heart surgery and fetal surgery teams that integrated seamlessly to successfully perform a complex lifesaving fetal surgery,” said Cass. “This tumor was growing rapidly in the exact wrong spot. It was compressing the heart of the fetus, causing fluid accumulation, and we started seeing signs that the cardiac function was deteriorating. We needed to act quickly and decisively to rescue the fetus.”

The team, led by Feixiong Cheng, Ph.D., of Cleveland Clinic’s Genomic Medicine Institute, reviewed data on over 7 million patients and found that the agent was associated with a 69% reduction of the incidence of Alzheimer’s.

“Recent studies show that the interplay between amyloid and tau is a greater contributor to Alzheimer’s than either, by itself,” said Cheng. “Therefore, we hypothesized that drugs targeting the molecular network intersection of amyloid and tau endophenotypes should have the greatest potential for success.”

“Notably, we found that sildenafil use reduced the likelihood of Alzheimer’s in individuals with coronary artery disease, hypertension and type 2 diabetes, all of which are comorbidities significantly associated with risk of the disease, as well as in those without,” added Cheng.