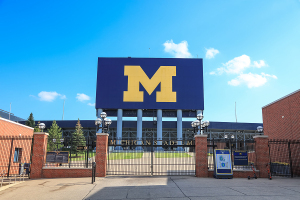 The University of Michigan will pay $490 million to students in damages for sexual abuse they experienced at the hands of former sports doctor Robert Anderson.

Announced Wednesday, the settlement comes after 15 months of mediation. The 1,050 students are mostly male and among several generations that date all the way back to the 1960s. They will each receive $438,000, with $30 million set aside for future accusers who come forward by July 31, 2023.

The amount is among the largest made by an American university to settle sexual abuse allegations and was the largest of any that involved mostly male victims, according to The Wall Street Journal.

“We hope this settlement will begin the healing process for survivors,” Jordan Acker, chair of the Board of Regents, said in a statement. “At the same time, the work that began two years ago, when the first brave survivors came forward, will continue.”

A former director of the University Health Service, Anderson was the physician for the school’s football team and other athletic programs from 1966 until retiring in 2003. He died in 2008.

During this time at the school, he allegedly molested the students during physical examinations, many of whom required one to participate in athletic programs, and performed exams that investigators have deemed unnecessary and improper, according to The New York Times. One woman said that he gave her a pelvic exam when she only had a sore throat. A music major who was not an athlete named Bill Herndon said he saw Anderson for a urinary tract infection in 1971, and that the doctor refused to remove a needle from his arm unless he performed oral sex.

Authorities in Michigan began investigating allegations against Anderson in 2018 after Tad DeLuca, a former wrestler, wrote to them. He told police that he complained in 1975 to his coach, Bill Johannesen, and the athletics director at the time, Don Canham, about Anderson’s conduct during exams, only to be berated by Johannesen in front of his teammates, kicked off the team and stripped of his scholarship, reported NBC News. He said that Anderson used to be referred to as “Dr. Drop Your Drawers Anderson.”
1(current)
2