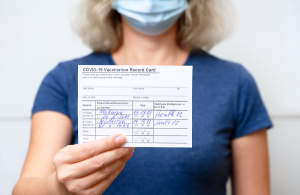 Fake COVID-19 vaccine cards could be had at Amityville's Wild Child Pediatric Healthcare on Long Island — $440 for a two-shot adult one and $85 for the kids.

Business was so wild that it made the neighbors suspicious.
COVID
“It’s frightening beyond words, and I’m grateful it has been put to an end,” Erin Bevilacqua of nearby Park Ave Grill told CBS 2's Jennifer McLogan. “Break laws, give fake vaccines. Very disheartening.”

The profitable run ended when they ran their scam on an undercover detective, according to The New York Times.

Now the pediatric nurse practitioner who runs the clinic, Julie DeVuono, 49, and her assistant, LPN Marissa Urraro, 44, each face class D felony counts of forgery in the second degree, say prosecutors. Owner DeVuono is also looking at a class E felony — offering a false instrument for filing in the first degree.

They could get as much as 7 years in prison.

Wild Child had already offered a “vaccine exemption workshop” during 2017 and 2018 that advertised that it would discuss “details for crafting a suitable exemption letter with the best chance of acceptance,” and how to choose a school that “may be more vaccine flexible,” according to the Washington Post.

“These individuals allegedly used their positions as licensed healthcare professionals to engage in criminal conduct for their financial benefit,” Suffolk County District Attorney Raymond A. Tierney said in a statement. “This fraudulent scheme was uncovered thanks to the hard work of the members of the Suffolk County Police Department DA’s squad assigned to my office. I hope this sends a message to others who are considering gaming the system that they will get caught and that we will enforce the law to the fullest extent.”

A search of DeVuono's home uncovered about $900,000 in cash and a ledger indicating that as much as $1.5 million was taken in by the scheme, starting in November.

At the pair's arraignment last week, Urraro's lawyer told the paper that she had pleaded not guilty and was released with no bail.

“We look forward to highlighting the legal impediments and defects in this investigation,” attorney Michael J. Alber told the Times.
1(current)
2