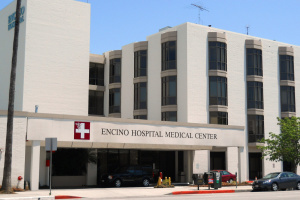 Ashkan Amirsoleymani, 35, checked himself into Encino Hospital Medical Center’s ER in the San Fernando Valley on June 2 for anxiety. He allegedly said he had a gun before pulling out a knife, stabbing the three and locking himself in a room for four hours, reported The Los Angeles Times.

The victims were transported in critical condition to a trauma center, but were later reported to be stable, according to USA Today. Two were released Saturday.

Witnesses described the scene as a “bloodbath.” Ultrasound technician Benjamin Roman told KNBC-TV that he saw the physician who was attacked. "There was a lot of blood ... he might have got her abdomen.”

Roman said the suspect appeared to be high, as he looked anxious and was drenched in sweat, and had a dog with him.

Police were called around 3:50 p.m. and surrounded the facility. A SWAT team tried unsuccessfully to negotiate with Amirsoleymani before arresting him. It was not specified how they got to him, but Deputy Chief Alan Hamilton of the LAPD Valley Bureau said they used “other methods outside of negotiations.”

The suspect was sent to another hospital for self-inflicted injuries to his arms. He has previous arrests for assaulting officers. His bail is set at $3 million.

A three to four-inch blade was recovered. No motive has been established.

In a statement, hospital owner Prime Healthcare said no one else was hurt and that "patients were safe" and "care was uninterrupted."

Attacks on hospital employees are a rising concern. Just days before, a gunman shot up Saint Francis Health System in Tulsa, Oklahoma, killing four people and injuring others before turning the gun on himself. He was targeting a surgeon whom he blamed for back pain he experienced following a recent procedure. The surgeon was among those killed.