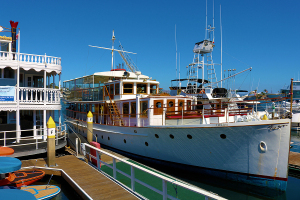 Dr. Meg Autry says the boat will reside in federal waters in the Gulf of Mexico, where it will not be subject to states’ abortion restrictions and because there is no federal law that prohibits the procedure. The boat will be called the PRROWESS, which stands for “Protecting Reproductive Rights of Women Endangered by State Statutes,” according to KCBS Radio.

She says that she and her group require at least $20 million to acquire and retrofit a vessel, and cover ongoing costs for patient care, security, and liability insurance. The potential launch of the at-sea clinic follows the Supreme Court’s overturning last month of Roe V. Wade, the landmark case that ruled that the constitution protected women’s right to have abortions, along with Planned Parenthood v. Casey.

"It is just phenomenally difficult to get to an access state, even if it's paid for," Autry told KCBS Radio. "Not only is this an innovative, different idea for surgical terminations, but it's also closer, and more accessible and quicker than other options."

On the PRROWESS, abortions will be performed on pregnancies of up to 14 weeks. Contraception will also be offered and “potentially vaccination and point-of-care testing for sexually transmitted infections and treatment for that," according to Autry.

She says patients will have "several options" for transport to the boat. Federal waters are nine nautical miles from the coast of Texas and three from those of Alabama, Louisiana and Mississippi. All four have banned abortions, with the only exception in any of them being rape in Mississippi.

Autry says she is aware of the potential backlash that she and her group will receive for performing abortions near states where the practice is banned, and that they have "contacted and consulted with security experts who have worked for other large organizations and have worked in the water."

The PRROWESS is currently raising monetary donations. Autry and the other organizers are also potentially looking for a donated vessel.