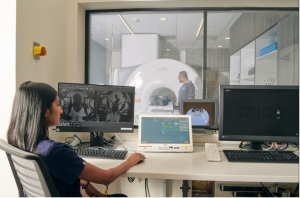 NYU Langone and SQMS are studying the combined use of quantitative MR and quantum computing for accurately assessing tissue properties for disease detection. (Photo courtesy of Fermilab)
NYU Langone and Fermilab’s Superconducting Quantum Materials and Systems Center have proposed a pilot program to study a new method in MR imaging that combines quantitative MR (qMR) with quantum computing.

The two would develop algorithms that quantum computers could use to accurately and rapidly determine multiple tissue properties from MR scans. While quantum computing would speed up and make scans more accurate, the algorithms would improve qMR for clinical use to allow doctors to confirm interpretations by comparing MR scans based on statistics and machine learning, rather than inconsistencies in image contrast.

“We expect to be able to model a large number of properties and the interactions among them to obtain a more comprehensive picture of the underlying structure of the imaged tissues. This will be possible not just because quantum computers enable faster generation of the large models, but also because they are better suited than traditional computers to model the interactions between tissue properties in MR, since they are governed by the laws of quantum mechanics,” Dr. Riccardo Lattanzi, an associate radiology professor at NYU Grossman School of Medicine and principal investigator, told HCB News.

The data is held within the 3D pixels of MR scans, which quantum computers can use to measure properties to assess and monitor patient health across multiple scans. It also can speed up measurements and create more accurate MR simulations to show the underlying properties of the MR data fingerprints.

“Having multiple quantitative parameters that reflect the underlying properties of tissues improves detection of lesions and pathologies. Furthermore, by looking at them from different angles (i.e., by having multiple biophysical parameters estimated for the same pixel), we can also better characterize these lesions to help create personalized treatments," said Lattanzi.

He adds that another potential application is being able to generate digital twins to detect and characterize abnormalities.

SQMS Center is made up of 23 institutions studying the use of quantum computing. The partnership is the first one it has undertaken for directly advancing healthcare.

NYU has received DOE Office of Science approval to become a member of the SQMS Center.

The collaboration is pending final approval of a formal agreement between NYU and Fermi Research Alliance, which manages Fermilab.