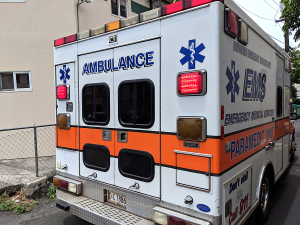 The fire was sparked by an apparent explosion on August 24, outside the hospital, which is located on the island of O'ahu. Video of the scene showed smoke coming out of the vehicle. A paramedic in the back was critically injured, reported Hawaii News Now (HNN).

An EMT in the front was uninjured and tried to open the back doors of the ambulance but was unable to because of the flames.

The Honolulu Fire Department responded and had the fire under control within 11 minutes, but EMS officials said the patient died at the scene. The injured paramedic, a 10-year veteran of the force, was hospitalized in the ICU at Straub Medical Center.

The patient's identity was not released, and the cause is still under investigation, but some suspect it is linked to an oxygen device or oxygen-rich environment.

City Emergency Services Director Dr. Jim Ireland says ambulance fires are “extremely rare,” but not unheard of, and that the role of oxygen cylinders is likely to be investigated as a potential cause.

“All of our ambulances carry oxygen. They carry oxygen in a main cylinder for the actual ambulance and portable cylinders that we can take into the house. I don’t have information on what exactly was transpiring in the back of the ambulance, and I don’t want to speculate, but I think that will all be a part of the investigation,” he said in a new conference on August 25.

Officials said the 911 call for the man was routine. Sources told HNN that the patient was attached to a continuous positive airway pressure system.

EMS personnel will often use oxygen when a patient is in respiratory distress. While not flammable itself, oxygen can cause other materials to ignite and look like explosions.

To aid the investigation, the city is making records available to national organizations like the National Highway Traffic Safety Administration.

Just two weeks earlier, another ambulance fire occurred in a small town in India. The female patient, her attendants, the driver and paramedic were unharmed and able to escape, according to East Mojo News.

The fire was linked to an oxygen cylinder that the paramedic was adjusting outside a gas station. The entire ambulance was gutted, and highway traffic was disrupted for several hours.