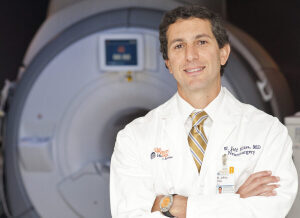 Researchers at the University of Virginia Health System (UVA Health) saw dramatic improvement in early tests immediately following the treatment. But these tests could not show if the benefits would continue and be long-lasting.

In their current study, 40 trial participants from the original cohort were assessed, and continued to see a more than 70% reduction in their treated tremors, with no progressive or delayed complications.

The study is the largest long-term follow-up that has been possible to date for the procedure, known as unilateral thalamotomy.

“As this is an incisionless and outpatient treatment, we are able to effectively reduce tremor in patients who may not be able to or may not want to pursue more invasive options,” said Dr. Shayan Moosa, a UVA Health neurosurgeon, in a statement.

Focused ultrasound treats tremors by targeting and delivering sound waves to faulty circuits in the brain that stimulate unwanted movement. It is guided by MR imaging, with doctors pinpointing the exact spot in the brain where treatment needs to be delivered.

The FDA approved its use in 2016 for essential tremor, and has also approved it for Parkinson’s disease tremor and dyskinesia. But limited access to advanced technologies and expertise have prevented it from becoming widespread among hospitals.

Dr. Jeff Elias, the study’s principle investigator, says that while promising, the findings are not a guarantee that the effects in every patient will be long-lasting or permanent.

“It is important to note that most of the patients had very long-lasting benefits, but there are some cases where tremor can recur,” said Elias, a UVA Health neurosurgeon.

Researchers at UVA are also using focused ultrasound to investigate other potential medical applications, including cancer treatment and the ability to open the brain’s protective barrier to deliver treatments that could not be used before for diseases such as Alzheimer’s.

The findings were published in the Journal of Neurosurgery.