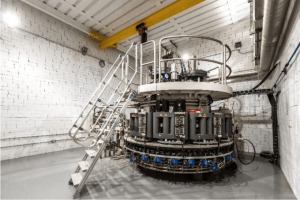 NorthStar completed construction and equipment installation at the facility in December 2022, and expects to complete startup and regulatory submissions before the end of 2023.

The company used a “two beams on target accelerator” approach to produce the Mo-99 batch with its proprietary electron accelerator system, a milestone that holds the potential to nearly double the company’s commercialization of Mo-99 in a single target set without producing as much radioactive waste as conventional uranium-based Mo-99 production processes.

The facility is home to two roughly $5 million particle accelerators designed by IBA that were installed in 2021.

It also does not rely on supplies from overseas nuclear reactors, and increases NorthStar’s domestic production of the radioisotope in collaboration with the University of Missouri Research Reactor (MURR).

“Once our newly completed Accelerator Production facility is licensed and operational, NorthStar will have sufficient total production capability to meet nearly 40% of U.S. demand for Mo-99. This is particularly important given that the historically fragile overseas Mo-99 supply chain remains fraught with shortages, as recently as this past November, underscoring the continued need for domestic, reliable, non-uranium-based Mo-99 supply for the United States,” said NorthStar president and chief operating officer Frank Scholz in a statement.

Mo-99 is the parent isotope of technetium-99m (Tc-99m), the most widely used diagnostic imaging radiotracer, that is used in exams for 40,000 U.S. patients daily.

In 2018, NorthStar became the first U.S. company to produce a domestic supply of Mo-99 in nearly 30 years. It used a non-uranium-based process to irradiate and process Mo-98 targets at MURR with neutron capture technology.

“Dual-electron beam accelerator production is one of the most efficient methods of making Mo-99, and can also be used to produce therapeutic radioisotopes such as copper-67 (Cu-67) and non-carrier-added actinium-225 (n.c.a. Ac-225),” said James Harvey, senior vice president and chief science officer of NorthStar Medical Radioisotopes.