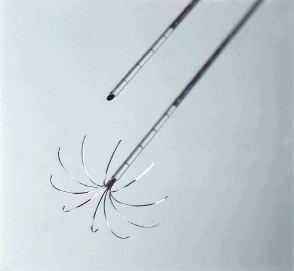 Barrett's disease results when acid reflux causes cells in the esophagus to mutate to become more like stomach tissue. An estimated 3 million Americans have Barrett's. About 1 in every 200 of them will develop esophageal cancer. Until now, patients with Barrett's esophagus watched for precancerous changes and sometimes doctors were forced to remove patients' esophagus, a wrenching procedure that restricts eating.

Last week, scientists at a conference of gastroenterologists in San Diego presented results on Barrett's patients treated with RFA. About 74 percent were free of the Barrett's disease for a two-year period and have still not had a recurrence of the disease. Other studies showed that RFA caused few side effects.

During RFA, patients are sedated. A physician inserts a tiny camera, along with a balloon down the esophagus. A second balloon delivers a burst of energy that burns out the Barrett's tissue. This tissue looks red and rough in contrast to healthy tissue. To date, about 16,000 RFA procedures have been performed since 2001 and Medicare and most insurers cover the procedure.

The question now is: Should the costly ablation treatment be given to lower-risk patients with GERD preemptively?