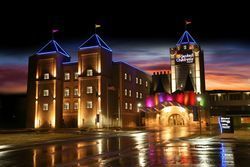 The hospital's tapestries, carvings, stained glass, paintings and enchanted forest are all part of a story, "The Legend of Sanford Castle," which features animal characters. Everyone gets a copy of the story and coloring book when they're admitted. What's more, every floor within the hospital represents a different theme, based on the characters in "The Legend of Sanford Castle."

The "castle" also includes a royal balcony and playrooms. Each playroom has computers with Internet access. The facility also employs a teacher. For teenagers, there's a room with movies.

Until March 11, Sanford Children's Hospital was part of the Sanford USD Medical Center. But now, children and teens have vacated the main building and have moved into a $60 million, 146-bed pediatric "castle of care," as the hospital is called.

The "castle" has an intensive-care unit, neonatal ICU, lab, nutritional facilities, a pharmacy and rehabilitation services. The hospital was founded with a $16 million donation from Denny Sanford, a financial entrepreneur "whose vision was to be able to serve the Sioux Falls, South Dakota region with a facility built specifically for kids and teens," Jan Haugen-Rogers, vice president of the children's hospital, told DOTmed News. Others in the community more than matched his gift.

"I guess I would tell you it's a building that's not only beautiful but functional, welcoming to children and adults alike, blending friendliness with state-of-the-art health care," Haugen-Rogers says.

She says she's especially proud of the fact that in May the hospital will receive GE's VCT Light Speed 64-slice scanner, which will reduce radiation levels by 40 percent.

Meanwhile, Sanford has a mobile radiology unit in the shape of a fire engine that can be brought to kids' rooms and a CT scanner featuring a three-dimensional mural and painting to make the equipment look less scary.

The hospital cares for children and teens who have conditions such as cystic fibrosis or asthma as well as cancer. "Some of the children are in the oncology unit, but we basically take care of all young people into their 20s," Haugen-Rogers says.

Sanford Children's Hospital is supported by a team of more than 60 pediatricians, including more than 40 who specialize in 20 different disciplines, as well as more than 150 Sanford Clinic family medicine physicians.