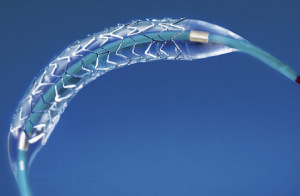 Coated stent
Heart disease patients 65 and older who receive stents coated with medicine to prevent blockages are more likely to survive and less likely to suffer a heart attack than people fitted with stents not coated with medication, according to a new study supported by HHS' Agency for Healthcare Research and Quality (AHRQ) and the American College of Cardiology's National Cardiovascular Data Registry.

The comparative effectiveness study of 262,700 Medicare patients who received stents to keep heart vessels open is the largest trial ever to compare drug-coated stents with bare metal ones. It was presented on March 28 at the American College of Cardiology's 58th Annual Scientific Session in Orlando, FL.

A team of researchers from Duke University, AHRQ and Kaiser Permanente found that, compared with patients who received bare metal stents, those fitted with stents coated with medication, called drug-eluting stents, had an 18 percent better survival rate over the 30-month study period and were 16 percent less likely to suffer a heart attack.

"The findings provide important new evidence for decision making by heart disease patients and their physicians," said AHRQ Director Carolyn M. Clancy, M.D. "These results should help resolve many lingering questions regarding the safety of drug-eluting stents in recent years."

HHS says FDA approved two stents coated with drugs in 2003 and 2004, but then issued precautionary advisories in 2006 after receiving scattered reports of blood clot formation, or thrombosis, and deaths. Subsequent clinical trials and other studies produced conflicting results.

"Some previous studies have suggested that drug-eluting stents are associated with an excess long-term death rate, whereas others have not," said the study's lead author, Pamela S. Douglas, M.D., Geller professor of medicine at Duke University.

The researchers found no significant differences in the percentages of drug-eluting and bare metal stent patients who required a repeat angioplasty or coronary artery bypass graft surgery (roughly 23 percent) and in the percentages of patients who suffered strokes or major bleeding (about 3 percent and 3.5 percent, respectively). The results were not affected by age, gender, race, ethnicity or other factors.
1(current)
2