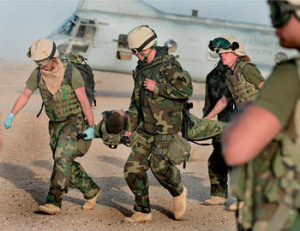 Many advances in orthopaedics
have evolved because
orthopaedic surgeons are integrally
involved in the treatment of those personnel
with war wounds
Orthopaedic surgeons play a crucial role in the care of active duty military personnel, providing treatment as soon as possible after injury, according to an article in the April issue of The Journal of Bone and Joint Surgery (JBJS).

One of the article's authors, Dr. Dana C. Covey, an orthopaedic surgeon from Naval Medical Center, San Diego, says that "most military personnel who die from combat trauma do so because they bleed to death. If they live through that first golden 15 minutes, they often gain another two or three critical hours. Consequently we try and get patients to our forward surgical teams as soon as possible," he says.

Dr. Covey notes that many medical advances have been made during wartime, because battlefield casualties stimulate research and experimentation. "For instance, the basis for the U.S. regional trauma center system came out of the Vietnam War. "Many advances in orthopaedics have evolved because orthopaedic surgeons are integrally involved in the treatment of those personnel with war wounds," Dr. Covey says.

He adds that orthopaedic surgeons are highly skilled at repairing the limb injuries that comprise approximately 70 percent of combat injuries. Those injuries are typically caused by high-energy weapons and are highly damaging to bone and soft-tissue. Injuries caused by explosive devices are common in Iraq and often combine penetrating, blunt, and burn injuries.

In Iraq, nine out of 10 wounded service members survive. This highest survival rate in history is probably the result of multiple factors including:

Small, highly mobile surgical units are being placed far forward on the battlefield to provide expedient treatment known as tactical surgical intervention. Surgical and intensive care advances have centered on improvements in the ability to stop bleeding and decrease infection.

* Recombinant factor 7, a genetically engineered blood clotting factor.
* Tourniquets are issued to all Marines, soldiers, airmen, and sailors on patrol, so they can be rapidly applied to injuries.
* Damage control surgery techniques to stabilize severely injured patients.
1(current)
2