Lung Cancer Survival Jumps When Radiation and Chemo Are Given Concurrently 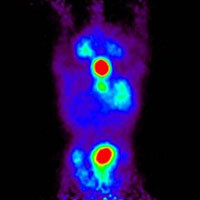 U-M researchers are currently
looking at using PET
imaging during the course
of lung cancer treatment.
High doses of radiation combined with chemotherapy improve survival in patients with stage III lung cancer, according to a new study by researchers at the University of Michigan Comprehensive Cancer Center.

"When patients are diagnosed with stage III lung cancer, surgery is often not an option, and survival rates are typically quite low. Finding new ways to improve survival, even in small increments is crucial," says senior study author Feng-Ming Kong, M.D., Ph.D., associate professor of radiation oncology at the UM Medical School and chief of radiation oncology at the Ann Arbor VA Healthcare System.

The study, published in the April 1 issue of the International Journal of Radiation Oncology*Biology*Physics, looked at 237 patients who had been treated for stage III non-small cell lung cancer at UM and the VA Ann Arbor.

Patients treated with radiation alone had the worst overall survival rates, living only an average 7.4 months after diagnosis. Adding chemotherapy increased survival to 14.9 months when it was administered after completing radiation and 15.8 months when administered at the same time as radiation. After five years, 19.4 percent of the patients receiving concurrent chemotherapy were still alive, compared to only 7.5 percent of patients receiving sequential chemotherapy.

U-M researchers are currently looking at using PET imaging during the course of lung cancer treatment to personalize high dose radiation therapy in many individual patients. As the tumor becomes smaller during treatment, increasing the radiation dose becomes more tolerable since it is targeting a smaller area. The U-M researchers believe this strategy could lead to improved treatment outcomes in many patients.