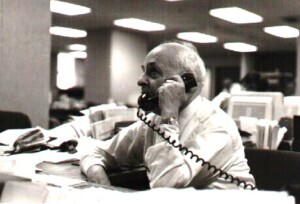 Stimulation that older people
gain from the workplace
may prevent a decline in
mental abilities
Research from the Institute of Psychiatry at King's College London found that people who retired later delayed Alzheimer's disease for a longer length of time that those who retire early.

The researchers considered factors like education, employment and retirement. For every extra year of work, there was an approximate six-week delay in dementia onset.

The study was paid for by the Alzheimer's Research Trust and Britain's Medical Research Council and was published in the International Journal of Geriatric Psychiatry.

One of the researchers, Simon Lovestone, and co-author of the paper said that the intellectual stimulation that older people gain from the workplace may prevent a decline in mental abilities and keep people above the threshold for dementia for a longer period of time. Lovestone also acknowledged that doctors still do not entirely understand how to delay or prevent dementia. Other experts say that more research is needed to confirm the study.

Other studies have indicated that more education may lower the risk of dementia.

Alzheimer's disease is the most common cause of dementia and accounts for nearly 60 percent of all cases. Dementia affects 1 in 20 people over the age of 65.

According to Alzheimer's Disease International, there are an estimated 30 million people worldwide with dementia.