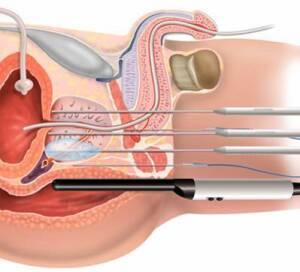 The four-year study followed 475 men treated for early stage prostate cancer. It also resulted in the development of "probability plots," gauges which can be used to predict when treatment side effects such as urinary incontinence, sexual dysfunction or bowel problems might return to normal, or whether the patient will ever fully recover. Such predictions could be used to determine whether further treatments or surgeries are needed to deal with adverse side effects, said Dr. John Gore, a urologist and the study's first author.

The study appears June 9 in the early online edition of the Journal of the National Cancer Institute.

"These probability plots are more helpful than the normal functional trajectory curves that are used," Gore said. "They allow people to point toward where the function level is currently and predict what it might be in the future. Is a patient's incontinence, for example, likely to get better? If not, the doctor and patients may agree to proceed with treatment options such as drugs or surgery."

The study is unique because it is not a cross-sectional review. Rather, researchers knew what a patient's baseline function was prior to treatment. That way, Gore said, they had a target to shoot for in judging recovery from side effects. The goal was to get the patient back to the function level experienced before treatment, if possible.

The researchers studied the quality of life in men who either underwent radical prostatectomy, implantation of radioactive seeds in their prostate gland, or had external beam radiation therapy. The three treatment options rank about equally in survival outcomes for most men, so specific impacts on quality of life become paramount in making treatment decisions, said Dr. Mark Litwin, the study's senior author, a professor of urology and a researcher at UCLA's Jonsson Cancer Center.

"The good news is that the patients' overall mental and physical well-being were not profoundly affected by any of the three treatment choices," Litwin said. "That's good news for men with a diagnosis of prostate cancer hanging over their heads. In general, they'll be OK, no matter which of the three options they choose."

The study found that urinary incontinence was more common among patients who underwent prostatectomy than those who had seed implants, called brachytherapy, or external beam radiation. Sexual dysfunction was found in patients in all three treatment groups. Surgery patients were less likely to regain baseline sexual function than were patients who underwent external beam radiation. Bowel dysfunction and irritable bladder were more common after either form of radiation therapy than after prostatectomy.
1(current)
2