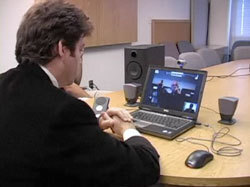 Telemedicine is helping
combat Parkinson's
however the cost-effective
approach is not fully insured
Telemedicine is giving Parkinson's Disease patients access to neurologists at the University of Rochester Medical Center (URMC).

A pilot study of the project, released this month at the International Congress of Parkinson's Disease and Movement Disorders in Paris, found that the remote system improved the quality of life and motor function for many PD patients.

For years, Parkinson's patients at the home would typically make 10 trips a year to Syracuse, Albany or Rochester to see a movement disorders specialist.

The expertise for such a project already existed at URMC, which has one of the largest Movement and Inherited Neurological Disorders programs in the nation with more than 10 physicians and has been designated a Center of Excellence by the National Parkinson Foundation and the Huntington's Disease Society of America.

The medical center has also been an innovator in the field of telemedicine. The system employed for this project is used at URMC to conduct remote pediatric and dental evaluations on patients in schools, day care centers, and other locations.

The system is essentially a low tech, low cost solution and consists of a laptop, software, and a web camera that allows the physicians to interact with patients.

While such remote evaluations have their limitations, Parkinson's disease is an ideal candidate for such a system in that it's a very visual disease; physicians can see how patients are doing without examining them in person, URMC officials say.

Telemedicine "visits" like office visits, provide an update on the patient's health, a review of medications, any potential complications, and a standardized motor skills evaluation including balance, gait, coordination, and stiffness, conducted by the physician with the assistance of a trained nurse.

An initial pilot project followed 14 patients for six months and then evaluated the outcomes of those who received telemedicine care with those who did not. The study found that telemedicine patients had significant improvements in quality of life and motor function. In addition, those receiving the remote checkups said they experienced more satisfactory care.

Unfortunately, one of the key obstacles to the wider adoption of telemedicine for Parkinson's and other diseases is insurance reimbursement. While studies of other projects have shown that telemedicine can reduce the overall cost of care, current reimbursement is limited to specific regions and generally does not cover the cost of care provided, URMC officials say.

"The number of people with Parkinson's will double over the next 25 years," says Kevin Biglan, MD, one of the neurologists who helped pilot the program. "Telemedicine represents a tremendous opportunity to expand access to specialized care and improve the quality of life of patients regardless of where they live," he says.