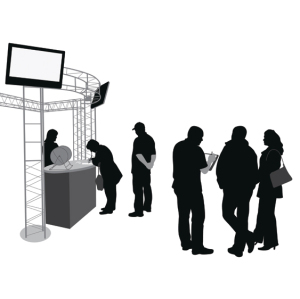 Although buyers and
sellers have been engaged
in trade shows for years,
turning the tables is
something new.
This report originally appeared in the August 2009 issue of DOTmed Business News

In today's hyper-competitive economy, determining where to invest your sales and marketing resources is a daunting task for most organizations regardless of size. A few years ago, marketing departments may have allocated nearly one-fifth of their budget to tradeshows, but, in just a few years, these resource allocations have been diverted or have dried up altogether.

With budget cuts taking center stage, companies are examining every expense and tradeshow expenditures are often on the chopping block. With resources such as Go To Meeting, WebEX, podcasts, and other technology advancements, it may seem the days of investing in tradeshow booths for leads are going the way of broadcast TV or even radio.

While some may believe the answer to reaching clients resides in tech savvy marketing tactics, there is still plenty of proof that traditional networking is how supplier companies continue to grow their businesses and stay competitive.

Although buyers and sellers have been engaged in trade shows for years, turning the tables is something new.

At a standard trade show, prospective clients visit vendor booths with vendors trying to get a moment of their time. At "reverse" trade shows - such as that of the Integrated Delivery Network (IDN Summit) and Health Connect Partners (HCP) - the roles of the buyer and seller are flipped. Now the purchasing executives man the exhibit booths while the vendors are the "attendees" there to visit them.

"When we purchased the IDN Summit & Expo last year, one of the things that captivated me was the reverse expo," said John Kelly, CEO of Bluegrass Healthcare Media, owner of the IDN Summit. "We've owned traditional trade show formats but I was convinced the reverse expo format is exceptionally effective for both the healthcare executives who host the booth and their supplier partners who visit them."

"Reverse tradeshows are a revolutionary way of opening your doors to hospital executives who are typically otherwise extremely busy during the day," said Mark Colavecchio, Online Auction Specialist for DOTmed who has attended several trade shows during his tenure. "At a reverse tradeshow, like Health Connect Partners in Miami earlier this year, hospital executives are expecting you to reach out to them, making it a relaxed and friendly environment. Also, because they generally are in a smaller venue, you are able to reach a greater number of clients in a shorter period of time. Simply put, the environment provides for a more effective sales process for both buyers and sellers."
1(current)
2
3