Diane Fowler with Siemens
MAGNETOM Aera 1.5T magnet model
When Diane Fowler, a school nurse in Springdale, Ark., asked her 11-year old son Artie what he wanted for Christmas this year, the answer didn't necessarily surprise her; it just left her with a complicated mission that even Amazon.com couldn't fulfill.

"He named a few things, like a police car, but what he really wanted was a CT or MRI machine," Fowler told DOTmed News.

Artie, who has autism and developmental delay, has been obsessed with scanners for the past year. Born prematurely at 28 weeks, he's had several related chronic health issues that have landed him in the hospital since the Fowlers adopted him eight years ago. But it wasn't until he came down with a rare cerebral shunt infection in November 2011, which required long-term hospital treatment, multiple surgeries and scans, that his fixation with CT and MRI machines really took hold. CT and MRI scanners have been the only thing on Artie's mind ever since. This year, he thinks Santa Claus can make his dream come true. 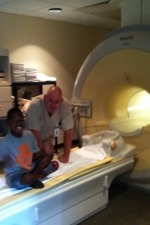 It all began when a technician showed Artie how to hold his ears properly during a CT scan so that the noise inside of the scanner wouldn't bother him.

"Then he started to love everything about it — the vents in the top of the machine and the lights going around," said Fowler.

When he returned home from the hospital, Artie learned about all the parts of the scanners from watching YouTube videos. There's one of Mark Harrison demonstrating how to use a CT machine that Artie is especially keen on, and Fowler said that when he grows up, he wants to work on scanners in the hospital. When Artie goes back to the hospital for any follow-up visits, Fowler said some of the technicians will let him push the button to move the scanner up and down when it's not being used. She said Artie would love to sit and watch scanners all day if he could.

After Fowler and her husband explained to Artie that they couldn't buy a real scanner for him to sleep on, Artie asked if Santa Claus would bring him a model CT or MRI machine this year. Fowler was determined to make her son's Christmas wish come true. Failing to find a place that sells model scanners, Fowler contacted GE Healthcare after learning from her older daughter, who works at a local Arkansas hospital, that the company manufactures most of the scanners in her facility. They suggested Fowler speak with Siemens Healthcare —- last year, Siemens developed a model MRI for play-therapists in the UK to help sick children prepare for scans.
1(current)
2