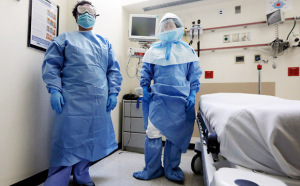 Protective suits and protocols
are being re-evaluated
This morning, the removal of 43 people from the U.S. Ebola watch-list came with a big sigh of relief. The virus has a 21 day incubation period and that length of time has now passed between those people and their last contact with Thomas Eric Duncan, the Dallas man who contracted the disease in West Africa and brought it overseas.

The news came on the tail of another announcement by the WHO stating that, after 42 days with zero new cases, Nigeria is Ebola free. In West Africa, however, Ebola continues to spread out of control with over 9,000 confirmed cases.

So far Duncan is only known to have passed Ebola to two people, both of whom were health care workers treating him before he died. Even after the removal of the 43 people from the watch list, more than 70 health care workers remain under watch for symptoms. As the U.S. works to completely contain the domestic spread of Ebola, it is the workers treating confirmed cases that may require special attention.

Yesterday the CDC published a report, "When Caring for Suspect or Confirmed Patients with Ebola," which comes on the heels of the AFT's request for better protocols and better funding for state-side hospitals.

First, Weingarten emphasized the importance of infection control protocols being implemented and practiced at all health care facilities.

Second, Weingarten endorsed the establishment of dedicated facilities in every state specifically designed to treat Ebola patients. Such a facility would require specialized doctors and nurses, as well as specialized lab, X-ray, and housekeeping personnel. Nurse Nina Pham is currently being treated in one such facility, the National Institute of Health headquarters in Bethesda, Maryland.

Third, Weingarten said front-line providers are not only needed, but they need to be involved in the planning process for their various hospitals. She cited one union member in Connecticut who first learned about his command's response to Ebola in a newspaper.

Weingarten also referred to the Ebola crisis as a wake-up call for the U.S. to invest more into its health care system. She said hospital funding had been cut 50 percent since 2003, leaving many states without the necessary infrastructure to provide urgent education in emergency situations.

As more news emerges indicating that Ebola in the U.S. may be under control, more voices will call for greater action overseas in West Africa. Candice Owley, chair of the health care division and an AFT vice president said, "We knew there was a crisis in Africa, but we didn't do enough. That was over there and not here. This is a global society, we are everywhere."