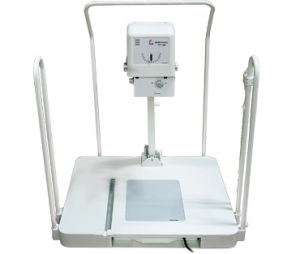 The HF PXS-710
from 20/20 Imaging
Health IT company 20/20 Imaging has gotten FDA approval for a first-of-its-kind anatomically programmed digital X-ray system. With podiatry techniques already installed into the imager, the company hopes the HF PXS-710 will bring new efficiency to their unique small market segment, and usher podiatry into the modern era for radiation.

DOTmed News spoke to Bob Salzman, president of 20/20 Imaging, who compared the new system with the old standard. "Normally you would pick a body part and your processing algorithms were tied to that but the software and the generator were separate," said Salzman, "But now it works as one and automatically selects the right X-ray technique."

The new system expedites the X-ray process while improving accuracy because it enables exams to be selected at the technologist workstation instead of at the device. Salzman said it also requires about half as much dose as the standard system, which not only means less radiation to the patient but also extended life for the tubes.

The company showcased the HF PXS-710 at RSNA 2014 as part of the build up towards the FDA clearance, which Salzman said industry insiders knew was fast approaching. Since the clearance, they have sold seven systems including one to a podiatry college.

Automating the imaging technique also assures accurate data processing for the operator. "It gets away from the old control box and dials and knobs and setting time. It’s caught up to hospital grade; what most technicians are used to using," said Salzman.

20/20 Imaging currently has over 4,400 system installs in small- to medium-sized podiatry and chiropractic practices.