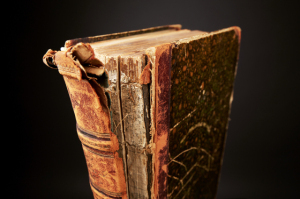 Researchers from the University of Nottingham in England are shedding new light on antibiotic-resistant superbugs using a recipe from a 1,000 year old leatherbound book of cures. In a collaborative effort between the molecular microbiology and early medieval history departments, an eye remedy from Bald's Leechbook has been found more effective against Methicillin-resistant Staphylococcus aureus (MRSA) than antibiotics — killing up to 90 percent in vivo.

The researchers grew thriving biofilms — sticky multicellular globs of Staphylococcus — in a synthetic model that mimics soft tissue infection. Once the bacteria had developed, they added the concoction outlined in Bald's Leechbook. After 24 hours they counted how many bacteria were still alive.

"We found that Bold’s eye salve is incredibly potent as an anti-Staphylococcus antibiotic in this context," said Dr. Freya Harrison, University of Nottingham, School of Life Sciences, in a video. "We went from an established population of a few billion cells all stuck together in this highly protective biofilm coat, to really just a few thousand cells left alive."

The researchers followed the instructions as interpreted by Dr. Christina Lee, Associate Professor in Viking Studies and member of the University’s Institute for Medieval Research.

Oswald Cockayne, editor and translator of an 1865 edition of Bald’s Leechbook, translated it as follows:

Add to sweetened wine ashes of harts horn. Work an eye salve for a wen, take cropleek and garlic, of both equal quantities, pound them well together, take wine and bullocks gall, of both equal quantities, mix with the leek, put this then into a brazen vessel, let it stand nine days in the brass vessel, wring out through a cloth and clear it well, put it into a horn, and about night time apply it with a feather to the eye; the best leechdom.

Through partnership with a team at Texas Tech University in the U.S., the researchers have established data showing that Bald’s eye salve kills up to 90 percent of MRSA bacteria in wound biopsies from mouse models. They believe the bactericidal effect of the recipe is not due to a single ingredient, but rather the unique combination of ingredients, and the stewing process in a brass container.

"It’s possible that there are chemical reactions going on in the mixture as it's left to stand; we might actually be taking precursor molecules from the ingredients and creating a novel molecule that has this very potent effect," said Harrison.

The researchers also found that when the medicine is too dilute to kill MRSA, it interferes with bacterial communication. This is important because bacteria have to talk to each other to switch on the genes that allow them to damage infected tissues. Blocking this behavior could represent a new way of treating infection.

Antibiotic-resistant bacteria are a growing problem worldwide, contributing to increasing health care costs and health care-acquired infections (HAIs). As antibiotic overuse allows bacteria to adapt and evolve, so too must the weapons physicians kill them with.

The researchers — who have now conducted four successful trials — presented their findings at the Annual Conference of the Society for General Microbiology in Birmingham last week. They intend to conduct further research to determine why Bold's formula is so effective.