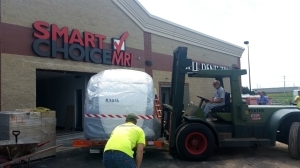 The Appleton clinic receiving
a new GE MRI
Renowned surgeon William J. Mayo once said, “The best interest of the patient is the only interest to be considered.” For Smart Choice MRI, a string of imaging clinics in Wisconsin, one of those patient interests is access to affordable diagnostics.

According to Rick Anderson, the company's CEO, it is the only clinic in the U.S. that charges a flat-rate $600 for an MR exam. When one considers that the Wisconsin Hospital Association lists the average price of an MRI exam at $2,948, that's quite a deal.

Anderson told HCB News that Mayo's words of wisdom influenced the standalone imaging clinic to open its doors eight years ago. While many of its contemporaries have shut down or joined health systems, Smart Choice MRI is opening its sixth clinic in Appleton, Wisconsin, tomorrow and is planning on opening an additional four clinics by the end of the year.

One of the biggest frustrations that patients have is that they don’t always know the cost of care. “They get a bill in the mail in three months and it’s confusing,” said Anderson. His company set out to make the pricing model transparent and easy for their clients to understand. The $600 fee includes both the cost of the scan and the interpretation by board-certified radiologists from the Cleveland Clinic.

The company can charge much less than other facilities because they are focused on avoiding unnecessary expenditures and position themselves in shopping centers and strip malls next to companies like Target and Subway, according to Anderson. Despite the bargain, he said quality is never jeopardized.

He believes that the U.S. health care industry is experiencing the “dawning of the age of the informed consumer.” As patient-centered care continues to take center stage, it's possible that more companies will find success following a similar business model.

Smart Choice MRI has plans to enter three other markets in the Midwest, and undertake an aggressive national rollout in the near future.