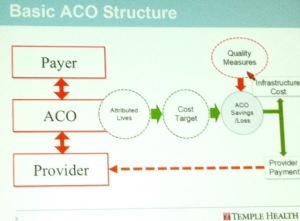 In a presentation on the first day of the 2015 RSNA, three radiologists with experience in providing service under Accountable Care Organizations (ACO) payment models, ushered in by the Affordable Care Act, shared their insights. Their feedback and predictions ranged from mildly opportunistic to somewhat pessimistic.

He added that the 2016 presidential election would not be a panacea. No candidate, he stressed, was going to be able “to wave a magic wand” to return health care payments to the old days of fee-for-service.

In his portion of the presentation Breslau discussed the aggregate performance of 33 “pioneer” ACOs across the country. He said that while costs dropped overall by $450 million under these plans it was not a significant amount in the scheme of national health care costs. He also noted that only 54 percent of the plans achieved any savings at all.

He noted that quality has been impacted positively under the ACO models, with improvements in 28 of 33 measures.

“But to date there doesn’t seem to be a correlation between saving money and improving quality,” said Breslau.

All three presenters noted that radiologists have not had much input in shaping quality measures. Aside from ease of scheduling, radiologists do not have much influence on patient satisfaction scores.

“Radiologists can reduce costs by avoiding unnecessary imaging and encouraging shared-decision making,” said Dr. Clifford Belden, who has recently been recently appointed chairman of radiology at Temple University. He spoke of his prior ACO experience at Dartmouth-Hitchcock Health. “But radiologists must be engaged or risk becoming just a commodity.”

Despite the mixed result of the pioneer ACOs – including that at Dartmouth-Hitchcock that reduced costs by four percent but still missed targets requiring the system to pay back $3.7 million – he thinks the model has potential. Belden cited the willingness of CMS to quickly change the metrics if they are not working.

He said that Dartmouth-Hitchcock canceled its ACO participation after the loss. But Belden added the health system has applied to participate in the next generation of ACOs.

Dr. John Lohnes, Jr., a radiologist with Wichita Radiological Group, said that an ACO group of specialists also pulled out of a pioneer ACO after disappointing financials.

"The problem with Accountable Care Organizations is that they are not really accountable or manageable,” Lohnes told the audience. "The model shifts risk from the payers to the physician specialists.” He said that much of the improvements needed to reduce costs and increase quality falls to medical specialists, not just primary care physicians.

Despite the challenges in reshaping the current health care system and the associated payments to doctors, Lohnes said he remains “a closet optimist.” As with his colleagues, he urged radiologists to get involved in policy-making decisions.