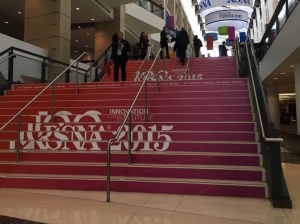 RSNA 2015
A word of advice from an eminent panel of radiologists and a radiology administrator from a Tuesday RSNA education session: if your practice has not commenced with the rollout of radiology interoperability for meaningful use, there may be bigger fish to fry.

“It amazes me how little attention physicians are paying to MIPS,” said Dr. Ramin Khorasani, vice chair of the Department of Radiology at Brigham and Women’s Hospital, who led the panel with three other experts.

A second panel member, Dr. James Whitfill, an IT and ACO executive who implemented meaningful use in a large primary care and radiology group, termed the new MIPS payment method for physician reimbursement a “tectonic shift.”

The heavily attended session started with a review of the state of the union on radiology meaningful use. When polled, about a third of the attendees indicated they were from radiology practices that had implemented meaningful use. Whitfill told HCB News that meaningful use was originally incorporated as part of the American Recovery and Reinvestment Act of 2009.

This has resulted in the rapid rollout of electronic health record systems (EHR). Meaningful use offered a set of payment quality and performance incentives for successful implementation (attestation) through 2019. In 2019, meaningful use will effectively by replaced by the MIPS system. Whitfill said that MIPS would merge meaningful use metrics with other new measures in pay-for-performance physician reimbursement.

The four panelists presented a full range of experiences and philosophies on the adoption or rejection of meaningful use. They noted that only a few of the current meaningful use quality and performance metrics apply to radiologists.

Alberto Goldszar, MBA, Ph.D. is CIO for a 140 physician radiology group in New Jersey which preforms more than 1.7 million exams a year. He said that the goals of both meaningful use and MIPS are to engage the patient and improve care. “My personal recommendation is you should try to adopt it even if you are late,” said Goldszar. “These programs take time, money and effort to do.”

Khorasani reported that Brigham and Women’s Hospital designed its own IT platform to successfully meet meaningful use. He described a major rework of the clinical workflow. This enabled them to be one of the first major academic medical centers to implement meaningful use across their system.
1(current)
2