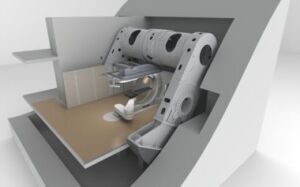 The MEVION S250
Although treatments with the system are still about a year away, the accelerator that will enable Medstar Georgetown University Hospital in Washington D.C. to perform proton therapy treatments has officially arrived in the nation's capital.

The MEVION S250 from Mevion Medical Systems has seen significant adoption and investment over the last few years. While the Georgetown accelerator is on track to be the seventh clinical installation, a company spokesperson told HCB News it is the eight accelerator the company has built. The first unit was built as a prototype and is currently used for testing and R&D at Mevion's manufacturing facility.

For Joe Jachinowski, CEO of Mevion, the timing and location of this particular delivery has a special significance. "With President Obama and Vice President Biden calling for the country to come together to fight cancer, it seems fitting that Mevion is bringing some of the world's most advanced cancer fighting technology to our nation's capital," he said.

According to a release, the MEVION S250 delivers proton therapy at a cost up to 80 percent lower than other systems and has an up to 90 percent smaller footprint. The current install base also boasts an industry-leading ramp-up time, throughput capabilities and uptime — while requiring 75 percent fewer staffers and up to 90 percent less operating energy.

Since the Mevion S250 is a single room system however, it's worth pointing out that some of larger and more costly systems on the market include more treatment rooms from which to deliver the advanced therapy.

Mevion is also entering the multi-room proton therapy market, with planning underway for a three-room MEVION S250mx system at the Los Angeles Proton Center. The system will include Mevion’s HYPERSCAN pencil beam scanning technology and will be installed on the campus of Beverly Hospital.

Meanwhile, the company has other single-room systems in various stages of development, including a system at the University of Florida Health Cancer Center that is currently undergoing clinical commissioning.

Other systems are expected in Switzerland, University Hospitals Seidman Cancer Center in Cleveland, and the Stephenson Cancer Center at the University of Oklahoma — where treatment is expected to start within the next few months.