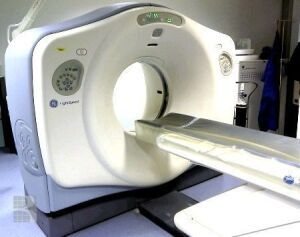 2003 GE LightSpeed 16 Slice CT
GE Healthcare wants medical equipment brokers and resellers to be aware that not all the software on its CT or MR systems can necessarily be bundled into the sale of the equipment itself.

In many cases, there are non-essential programs that are sub-licensed exclusively to the original buyer and, according to a statement sent to equipment dealers, those licenses do not automatically transfer with the rights to the machine itself.

And it's actually been that way for some time. "[These policies] have existed in our Standard Product Terms and Conditions for a number of years," Mark Emery, General Manager of Equipment of Lifecycle Solutions & Accessories for GE Healthcare, told HCB News.

To be clear, the software at issue enables advanced clinical applications and features. The rights to standard software — what the system needs in order to generate and review images — is included with the purchase of the equipment.

The OEM decided to notify resellers of the policy in response to learning that some equipment was changing hands with the non-transferable software still on it. Emery described the notice as an opportunity to "re-educate" the parties who might not be aware of the terms or were overlooking them.

Diana Upton, president of the International Association of Medical Equipment Remarketers and Servicers (IAMERS), said the policies outlined by GE "seem to depart from our usual practices."

Upton says it's unclear whether or not the announcement will have major implications for third-parties but that IAMERS is trying to establish some clarity on the issue through a dialogue with GE and will keep its members informed.

"We will facilitate addressing member concerns about this announcement and hope [it] in no way inhibits our usual sales practices because both customer and patient benefit from our efforts to reduce cost and complications in the marketplace," she said.

Upton's concerns echoed those laid out by a number of stakeholders commenting on a recent FDA docket examining the activities of third-party medical equipment sellers and servicers. As the industry has evolved over the last few decades, OEMs are calling for third-parties to be held to a higher level of accountability, while third-parties have warned the FDA against introducing regulations that would eliminate competition in a health system where safe, cost-saving alternatives should be encouraged.

According to GE, whatever one's opinion about third-party service, the sub-licensed ancillary software should never have factored into the resale equation to begin with. "GE aims to make clear the product terms and conditions surrounding licensed software that is not part of the operating system," said Emery.

But according to Upton, "It's a longstanding policy that they never enforced," and a renewed interest in upholding it could have complex ramifications.

The specific types of software in question depend on the device, said Emery, and a non-original end user can still obtain the licenses to use them by contacting GE.