Doctors are leaving private practice to work for hospitals 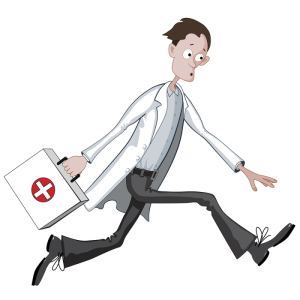 Nearly 40 percent of doctors in the U.S. are now employed by health systems or hospitals according to a study just out by the Physician Advocacy Institute (PAI) — a group concerned that this trend could contribute to higher health care costs.

"There are several forces converging to create strong incentives for hospitals to acquire physician practices and employ physicians, contributing to the rapid acceleration of these trends," Kelly Kenney, executive vice president of PAI, told HCB News.

For example, another analysis by PAI found that Medicare payments for three common services are up to three times higher when conducted on an outpatient basis in a hospital, as compared to in a doctor’s office.

"Medicare spends less when patients receive treatment in a physician's office, yet the number of physician-owned medical practices is rapidly shrinking," said Kenney. "The shift toward more physicians employed by hospitals could mean higher costs for the entire health care system. For patients, it impacts both where they receive and how much they pay for care."

According to Ed Drozd, Vice President of the Data and Analytics Practice at Avalere Health, which conducted the study for PAI, the percent of diagnostic radiologists who reported being employed in hospital/system practices rose 40 percent to 36 percent of all imaging specialists.

The most common reasons physicians report choosing employment are to eliminate the responsibility of managing a practice, which is essentially a small business; to stabilize their income and allow a hospital to take risk on physician reimbursement; and to improve their quality of life, to reduce stress related to patient loads and after hours calls. According to a Mayo Clinic study last year, 49 percent of doctors report meeting the definition of burnout, compared to 28 percent of other U.S. workers.

"Hospital acquisition of physician practices also builds and protects the hospital's patient base, and strengthens referrals within the system, which drives revenues," she noted. "Private practices with broad patient bases are particularly appealing as they would be subject to acquisition by a competing hospital system."

Other stresses on physician practices Kenney cited included: pending change in the way doctors will be reimbursed related to value-based payment models; the greater bargaining power of insurance companies as insurers consolidate; and increasing governmental physician compliance and reporting requirements.