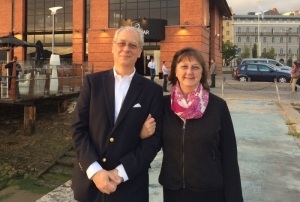 Barbara Fahringer and I attended the IAMERS European Meeting in Lisbon, Portugal.

It was an interesting meeting in many ways. I think everyone attended the meeting with great expectations; some left satisfied and some left a little worried.

There are a lot of things happening in the industry that many feel are bad for business. I think that the concern that people have — coupled with the opportunity to hear Joe Shrawder speak and the chance to network — accounted for what was in my unofficial analysis the biggest turnout I have ever seen at a European IAMERS meeting.

Maybe it is what is happening in the market, combined with the fact that IAMERS is still standing after 23 years, (even as other associations have come and gone) that accounts for the great turnout.

I will give you a little summary of Joe Shrawder's comments and explain why after listening to him, the first thing I did when I got home was buy some GE stock.

But first let me share my thoughts about the people I met in the order of meeting them.

Anders Jensen was there from AGITO along with Jens Krohn, Pia Nielsen and Christian Frandsen, who also addressed the group.

Anders is an amazing guy who has built quite an empire, but during this trip I spent time looking at photos of his new daughter. I have always been impressed with how humble Anders is — but not when it comes to his daughter!

There were two past IAMERS presidents in attendance: Dave Band and Don Bogutski. As usual, Dave is reserved and polite and while Don Bogutski is polite, he is anything but reserved. You always know if Don is at a meeting that all sides of an issue will be discussed.

Wes Preston from East Coast Medical joined the meeting and, as an expert on GE products, you know he was interested in the discussions at the meeting. Wes is a thoughtful and polite sort of fellow and you get the feeling he is probably a great engineer.

Harry Khabra and Ben Hunter were there from Engineer Exchange in the UK. They are such an interesting partnership and although they are different from each other in many ways, they both have a warm and polite demeanor. I attribute their success to hard work and good customer service.

Wanda Sloan was there escorted by her husband, Ed. Everybody thinks Ed is the successful businessperson with business interests on three continents but I know that Wanda is the brains of the operation. Ed and Wanda liven up any get-together.

Block has made an effort to build a scalable business within the pre-owned equipment industry. They have done a good job. One gets the impression that they constantly reevaluate their activities to make sure that they are headed in the right direction. I think everyone, customers and competitors alike, are impressed with Block.
1(current)
2
3
4
5
6
7
8
9
10