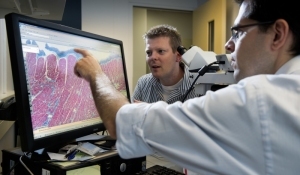 Only one percent difference between
digital and optical diagnosis
Royal Philips announced that its multi-center study that compared diagnoses made using digital whole slide imaging to those made with traditional optical microscopes met its pre-specified endpoints. The company is now submitting that data to the FDA to support expanded indications for its Philips IntelliSite Digital Pathology Solution.

The solution is an open platform that integrates ultra-fast slide scanners, an image management system and web-based pathology case viewer. To date, it has FDA clearance to be used as an aid to the pathologist when detecting HER2 expression in breast cancer.

"At the moment the HER2 application in the USA can only be used to score breast tissue stained with HER2," Esther Abels, director of Q&R and medical affairs at Philips, told HCB News.

The study aimed to assess the difference in major discordance rates between diagnoses made with digital pathology and microscopes. A total of 16 pathologists from Cleveland Clinic, University of Virginia, Miraca Life Sciences and Advanced Pathology Associates conducted about 16,000 reads across 2,000 cases.

The cases were at least one year old so the main diagnosis was available. The researchers used those diagnoses as the point of comparison, and the pathologists read and diagnosed each case digitally and optically every four weeks.

Philips announced another study earlier this year with Massachusetts General Hospital (MGH). The hospital is a key testing site for the digital pathology solution.

“You give one lab, in this case, MGH, five instruments. They put them side by side and have one pathologist read slides from all five and make sure he/she makes the same calls," Russell Granzow, General Manager of Philips Digital Pathology Solutions, told HCB News.