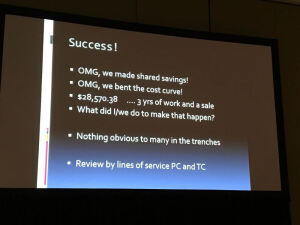 #RSNA16
The transition from volume-based imaging to value-based imaging within an Accountable Care Organization model can be daunting for radiology practices, but success is possible, those on the front lines say.

During a session at RSNA, moderated by Dr. James Whitfill, chief medical officer at Scottsdale Health Partners, a physician-led clinical integration network and ACO in Arizona, a panel of private practice radiologists spoke about their experiences in the new world of reimbursement.

“I think one of the biggest challenges for radiology is a lot of the strategies that played well in the fee-for-service world may actually be antithetical to success in the value-based world, and yet you’re not going to make this shift overnight,” Whitfill said. “Luckily enough, every other part of the health system is doing the same thing.”

There are different models to employ, including a hospital-centric, large-scale Vertical Integration-Centralized model, which is used by such facilities as the Mayo Clinic and Cleveland Clinic; or a smaller, more physician-focused Clinical Integration-Decentralized model that allows separate corporate entities to work together to improve care, manage costs and hold contracts with payers.

Dr. Rodney Owen, who practices in a group with 120 radiologists in the Phoenix metro area, and is part of a clinically-integrated network in Scottsdale, Arizona, said the shift has been an equal partnership between the hospital system and physicians, as opposed to ACOs where hospitals are driving the change.

The group was able to demonstrate shared savings, Owen said.

“The big spending in health care tends to be around these diseases that we just [do not have a major impact] in,” Owen said.

Radiology practices can have a large impact by doing screening, such as mammography, he said.

Owen also noted that sub-specialization and extracting as much information as possible from images can bring quality and value to a practice.

Responding to a question about how to have an impact on total medical costs, Owen said it was important to provide “the right care in the right setting to the right person, without redundancy.”

“Anything we can do to facilitate that is where we can bring real value that people are going to pay attention to,” Owen said.