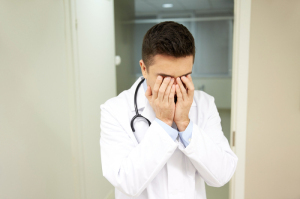 #RSNA16
In a RSNA session last week in Chicago titled "Will MACRA and MIPS Kill Your Practice?", three radiologists presented viewpoints that became more optimistic as the session progressed. While there are legitimate quality and cost control reasons for the new payment models, the panel acknowledged the change is unnecessarily confusing and the final rules were only adopted at the last minute in October.

"It would be nice if I could say you're going to learn a lot and leave feeling good. But that's not the case," Dr. David Levin, Emeritus Professor and Chairman of the Department of Radiology at Thomas Jefferson University Hospital deadpanned about Merit-Based Incentive Payment System (MIPS) preparation.

"It's like a colonoscopy prep — it's something you have to do," he added.

Given the late finalization, CMS has lightened the 2017 reporting demands by only requiring 90 days of 2016 data be reported, and has pushed the commencement date off until spring, according to Levin.

Confusing language and acronyms defining MIPS payments that change from one CMS and federal document to another have not made things easier.

For example, Levin noted some federal sources termed the reform "pillars" as "components" or "performance categories" in different sources. The six clinical MIPS quality measures — clinical care, patient safety, care coordination, patient and caregiver experience, prevention and population health — were also at times referred to in other terms, depending upon the federal source. He also presented a list of 10 acronyms in the rule language, such as QPP, QCDR and OPDR that are confusing.

"We don't know what all these things mean yet," said Levin.

On the positive side, he said the MIPS payment system — which was passed under the Medicare Access and CHIP Reauthorization Act in April 2015 — does get rid of the hated sustainable growth rate (SGR) payment system that required Congress to pass a "doc fix" every year, a nerve-wracking political process widely despised by physicians.

The second presenter, Dr. Ezequiel Silva III, a San Antonio-based radiologist, made the case for the need for a quality-based payment system. He noted that physicians have been through payment reforms in the 1980's with the prospective payment formula on the inpatient side.

"We've been here," Silva told HCB News after the session. "The stakes are higher this time, but it is possible to just do a little in the first two years and not get penalized."

He also noted that while the U.S. political landscape has changed with a Republican President and Senate, he does not think that necessarily portends a repeal of MIPS. According to Silva, MACRA — which required the MIPS payment reform — had bipartisan support when it was passed two years ago.
1(current)
2