Reaching the right terms in hospital-radiologist contracting at RSNA 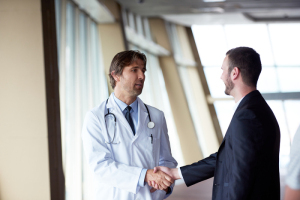 #RSNA16
Two experts shared pitfalls and strategies at an RSNA session last week in Chicago to ensure the exclusive contracts radiologists sign with hospitals protect their tenure and work environment.

There have been recent changes radiologists need to know about, according to W. Kenneth Davis, Jr., an attorney with Katten Law in Chicago who specializes in representing radiology groups.

"Many radiology groups, and even some hospitals, still believe agreements must be terminable without cause after two years," said Davis. "However, the relevant legal guidance from the IRS has changed."

According to Davis, if a radiology group is contracting with a nonprofit hospital, its exclusive provider agreement can be a five-year, "no-cut" agreement. This means the group can negotiate a five-year contract that is not terminable, except for breach.

He cautioned that radiologists must also be aware of Stark Laws and anti-kickback statutes.

Other emerging contract issues Davis cited were: the right to provide exclusive services (no carve-outs, sometimes problematic with new services); private use and benefit, such as that related to nighthawk reading services; excessive billing and collection charges; and shifting supervisory responsibilities to the radiology group.

"There is significant effort by hospitals to shift cost burdens - such as the expense of management - to the radiology group, but they don't want to pay the radiologists for those duties," said Davis.

He also warned of "insidious provisions." These include any contract clauses in the contract that give the hospital the unilateral right to set coverage and call requirements. Neither party should have the right to terminate the contract without cause and there should be provisions for either party to cure a breach of contract for at least 30 days, with 90 days preferable. "Clean Sweep" provisions, which require radiologists to cede their medical staff privileges if a contract is terminated, should also be avoided.

Performance standards must be negotiated and carefully weighed.