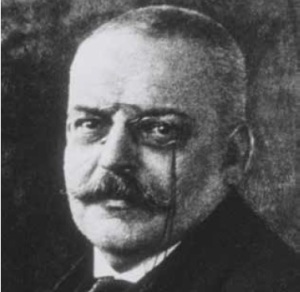 With longer life expectancies and a large cohort of Americans moving into their golden years, some diseases that inflict the elderly will take a more prominent role in health care discussions in the coming decades.

Perhaps one of the most frightening was first detailed to an audience of medical professionals in 1906. It would be four years later that it would be named in honor of the doctor who discovered the disease.

Alois Alzheimer was born in Germany on June 14, 1864. His father was a notary, so Alzheimer didn’t model his professional life on examples he grew up with. However, his parents instilled a sense of purpose in him, teaching him that it was honorable to look after the less fortunate.

Alzheimer took a strong interest in science and went on to attend the universities of Berlin, Tübingen and Wurzburg. He graduated from Wurzburg with a medical degree in 1887. By the following year, he was into his residency at the Hospital for the Mentally Ill and Epileptics in Frankfurt, Germany. His mentor, Emil Sioli, encouraged Alzheimer to expand his knowledge and branch out his efforts professionally. Alzheimer consequently studied psychiatry and neuropathy, which was of particular interest. He partnered with neurologist Franz Nissl to carry out studies of the pathology of the nervous system. These efforts culminated in the six-volume work “Histologic and Histopathology Studies of the Cerebral Cortex.”

At the age of 32, he married Cecilia Geisenheimer, a banker’s widow. His wife’s wealth meant Alzheimer didn’t have to struggle to pay bills, allowing him to focus more on his research. Still, he found time for other pursuits, with the couple having three children. Just seven years after they married, however, Cecilia passed away. Alzheimer’s younger sister, Elisabeth, moved in to help raise the children.

In 1901, the same year his wife died, Alzheimer met Auguste Deter, a 51-year-old woman with odd psychological symptoms and a deteriorating memory. Deter would become a major focus of Alzheimer’s research. Yet, he would continue to branch out even as he studied the puzzling and troubling case. Alzheimer would continue to investigate diseases like Huntington’s chorea and epilepsy. In 1903, he was asked to come to Munich as the research assistant of psychiatrist Emil Kraepelin. In Munich, he created a research lab to allow him to continue his studies of the brain. Just three years later, in 1906, Deter died at the age of 55. Through an agreement with Deter’s husband, Alzheimer had petitioned on her behalf to keep her in the better psychiatric hospital that would have otherwise been beyond her husband’s financial means. In exchange, her husband would allow him to receive her records and her brain upon her death.
1(current)
2