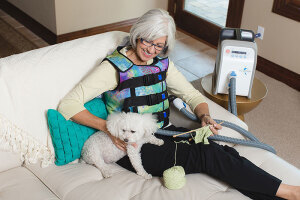 Royal Philips has signed a deal to acquire airway-clearance-solution-provider RespirTech.

“With this transaction, we will broaden our portfolio with a proven therapy to enable patients with chronic respiratory disorders to manage their condition and receive the care they need in the home,” John Frank, Philips’ Business Leader of Sleep & Respiratory Care said in a statement. “RespirTech’s vest therapy can be applied to a range of respiratory conditions and various neuromuscular diseases, where patients’ compromised abilities to cough often leads to serious respiratory complications and associated higher care costs.”

Studies have shown that RespirTech's vest system, which costs $12,000 to $15,000, is a cost-effective alternative to longer hospital stays for those with breathing difficulties.

The deal is scheduled to finalize in coming months, depending on typical closing conditions. Other financial details were not made public.

St. Paul, Minnesota-based RespirTech was begun in 2004 and employs over 200 people. In 2017 it had $37 million in revenue, according to the Minneapolis/St. Paul Business Journal.

RespirTech is “a portfolio company of Edina-based private equity firm Whiteciff Capital Partners,” according to the publication.

As the firm is growing rapidly, it is possible that a new HQ will be needed within a year, Chief Commercial Officer Bob Buehler told the Journal.

"We're only the scratching the surface in market penetration," he advised the paper, adding that, "Philips' resources will help us grow even more."

With sales rising by roughly 30 percent annually, revenues could hit $50 million this year, according to the Minneapolis Star Tribune.

CEO Dr. James Ehlen told the paper that although a few jobs may be lost due to the deal initially, the long-term plan is for growth. He noted that, "Philips intends to build around RespirTech in Roseville a [respiratory] center of excellence."

Ehlen, 72, also noted that he intended to stay on.

"I like the people so far with whom I am working at Philips," he told the publication. "I like walking in here every day and they said they would like me to stay as long as I wish. I will as long as I enjoy the work. I'm not going to work forever. For sure, I want to see a high-class transition."
1(current)
2