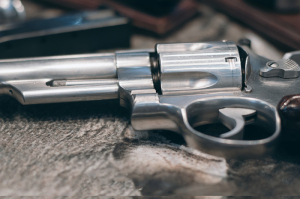 When Uttar Pradesh Minister Satyadev Pachauri was rushed to Ram Manohar Lohia Institute of Medical Sciences in Lucknow, India, for an emergency MR scan, his security guard made a destructive — and potentially deadly — mistake.

He brought his gun into the room.

The minister had blacked out during a speech he was giving on Friday and had been taken to the hospital for a workup.

The gun was sucked into the machine, which will take several weeks to fix, hospital sources told the Financial Express.

It will also be expensive, with some published estimates speculating that the cost could be anywhere from $100,000 and $400,000.

The institute and the machine mainly serve those too poor to pay for medical care, noted the paper, and they will be without its service during repairs.

An investigation has been ordered in the case.

The Medical Superintendent of the Hospital, Dr. Subrat Chadra told NDTV, "I will put up big notices everywhere in the hospital that people should not enter restricted areas without permission. I am not sure how the security officer managed to go in, we have launched an enquiry into it. The machine itself will take over 15 days to come back to action."

Pachauri fled the room as soon as he saw the gun pulled from his guard's pocket and sticking to the machine, according to reports.

The pistol was loaded at the time, but fortunately did not go off.

This incident is just the latest example of the sort of chaotic mishap that can be caused when someone brings a gun, or anything metallic, to an MR suite.

In January, 2016, for example, a veteran allegedly walked into an MR room in Indianapolis at Richard L. Roudebush Veterans Affairs Medical Center packing a .45 pistol, and it got sucked against the magnet and went off.

Fortunately his wound was not life-threatening.

In December, 2016, at an RSNA session in Chicago, experts weighed in on the issue of adverse MR events. There has been an almost 500 percent increase from 2000 to 2009 in the face of only a 114 percent increase in volume growth, according to Armen Kocharian, Ph.D., senior imaging physicist, Houston Methodist Hospital, and he suspects there were many more that went unreported.

And again in India, in 2014, a patient and tech were trapped in an MR for four hours, one with a broken arm, when a charged scanner launched an O2 bottle from the wheelchair in which the patient was being transported. In February, 2017, Indian MR technologist Swami Ramaiah received a settlement of nearly $150,000, after he was left temporarily paralyzed from the waist down by the accident at a Tata Memorial Hospital-run treatment and research center in Navi, Mumbai.