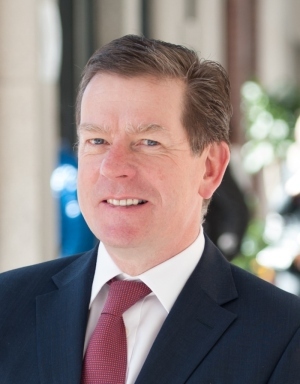 Immelt will remain chairman of the board until December 31, at which time Flannery will become chairman as well.

Current CFO Jeff Bornstein has been promoted to vice chair of GE.

“During this time of dynamic global markets and relentless focus on technology and operational excellence, there is no better person to lead GE than John Flannery,” said Jack Brennan, lead independent director for GE’s Board of Directors, in a statement. “John has spent almost half of his career living outside of the United States and has led complex financial and industrial businesses all over the world, including running GE Healthcare, GE in India and the business development team for GE through the successful acquisition of Alstom.”

He joined GE Healthcare in 2014, led its turnaround, building “organic revenues” five percent and margins by 100 basis points in 2016.

He launched Sustainable Healthcare Solutions, which has a goal of applying “disruptive technologies to health care providers across emerging markets.”

“John is the right person to lead GE today,” said Immelt, adding that he “led one of our most essential businesses.”

The succession plan had been in place for years, and for some on the street it was a welcome change.

Another Wall Street leader, JP Morgan's Jamie Dimon, noted, according to the market news show, that, "Jeff has dramatically transformed General Electric over the past decade – adapting during turbulent times and positioning the company extremely well for many years to come."

Flannery called his new role “the greatest honor of my career,” as well as stating that Immelt “transformed the GE portfolio, globalized the company and created a vision for the GE of the future by positioning the company to lead in digital and additive manufacturing.”
1(current)
2