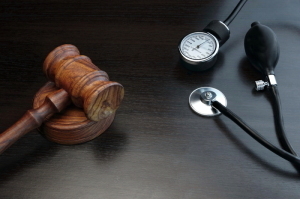 A pair of manufacturers of remote cardiac monitoring gear, and one executive, have agreed to pay $13.5 million to resolve False Claims Act violations, the Department of Justice has announced.

The involved parties – AMI Monitoring, also known as Spectocor, along with owner Joseph Bogdan, Medi-Lynx Cardiac Monitoring, and Medicalgorithmics, the present majority owner of Medi-Lynx – have agreed to the deal.

The claim was that they broke the law “by billing Medicare for higher and more expensive levels of cardiac monitoring services than requested by the ordering physicians,,” according to a DoJ statement.

The charges are that between 2011 and 2016, McKinney, Texas-based Spectocor, “marketed the Pocket ECG as capable of performing three separate types of cardiac monitoring services—holter, event, and telemetry,” according to the DoJ.

But when a doctor tried to enroll a patient in the Pocket ECG, the enrollment process “allegedly only allowed the physician to enroll in Pocket ECG for the service which provided the highest rate of reimbursement provided by a patient’s insurance, thus steering the ordering physician to a more costly level of service.”

“Sophisticated medical technology can be used to help doctors dramatically improve the lives of their patients, but it can also be misused to fraudulently increase medical bills,” said Acting U.S. Attorney for the District of New Jersey William E. Fitzpatrick .

Billing for unneeded services is a constant challenge for the government watchdogs. “OIG, along with our law enforcement partners, will aggressively investigate these crimes,” said special agent in charge Scott J. Lampert for the U.S. Department of Health and Human Services Office of Inspector General (HHS-OIG).

The allegations developed as a result of a suit by ex-Spectacor sales manager Eben Steele, who will collect about $2.4 million from the pair of settlements.

This is the latest in an ongoing line of fraud settlements over Medicare payments.

In May, for example, the U.S. simultaneously filed and settled a civil fraud lawsuit against benefits management company CareCore, part of eviCore healthcare, for authorizing medical diagnostic procedures paid for with Medicare and Medicaid funds over a period of at least eight years.

At the time, Acting U.S. Attorney Joon H. Kim stressed that, “benefit management companies are supposed to determine whether medical diagnostic procedures paid for with Medicare and Medicaid funds are necessary and reasonable. Instead, CareCore blindly approved hundreds of thousands of medical procedures over a period of many years, leaving Medicare and Medicaid to foot the bill.”