From gaming and self-driving cars to health care: GE announces partnership with NVIDIA

From gaming and self-driving cars to health care: GE announces partnership with NVIDIA 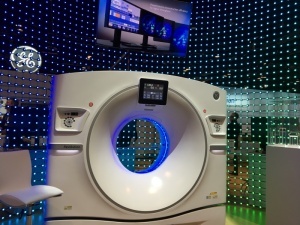 At the opening day of the 2017 RSNA annual meeting in Chicago, GE announced that it is creating a deeper partnership with NVIDIA, a company known for its work in gaming and self-driving cars that GE has collaborated with over the last decade, to bring NVIDIA’s AI solutions to GE’s imaging devices.

GE is also harnessing an Intel technology that the company says could potentially cut the total cost of ownership for imaging devices by up to 25 percent.

At the forefront of the announcement is the release of the new FDA-cleared Revolution Frontier CT scanner, which utilizes NVIDIA’s AI computing platform and allows it to process images two times faster than previous scanners.

On the show floor, Keith Bigelow, general manager of health care analytics for GE, said NVIDIA’s contribution is similar to the changes from a first-generation Apple iPad to an iPad Pro.

“What NVIDIA helps us do is reconstruct those images at a much, much higher velocity,” Bigelow says. “So, it’s the combination of having a core capability that has much higher resolution – and we needed more compute power in order to bring that together.”

The idea behind the further partnership is to accelerate the speed at which the 50 petabytes of data per year that hospitals create can be processed.

GE’s new Applied Intelligence analytics platform will also use NVIDIA GPUs, as well as the NVIDIA CUDA parallel computing platform and the NVIDIA GPU Cloud container registry to accelerate the creation, deployment and consumption of deep learning algorithms in new health care analytic applications that will be integrated into GE’s equipment.

As part of GE’s partnership with Intel, GE is using the new Intel Xeon Scalable platform, which GE officials say will cut first image display down to under two seconds, and full study load times down to under eight seconds.

The two companies also announced that they are investing in a digital development lab, fittingly in downtown Chicago. Called the Joint Performance Acceleration Lab (JPAL), the companies will develop new innovations.

The key goal of the development partnership is to lower the cost of ownership for hospitals and imaging facilities by improving performance of GE’s imaging systems.