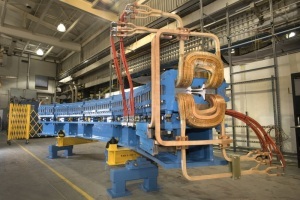 “Carbon Heavy Ion can only be produced with at least a 400 MeV Synchrotron,” Krishnan Suthanthiran, founder and president of TeamBest Companies and the Best Cure Foundation, told HCB News. “Our technology is the most sophisticated and yet the simplest solution, providing the most precise, conformal and hypofractionated radiation therapy of five fractions, compared to the range of 30 to 40 fractions found in proton, X-ray, and gamma external-beam radiation therapies.”

An advanced form of radiotherapy, carbon ion therapy targets cancer cells while minimizing damage to surrounding tissue. The treatment utilizes a carbon ion beam to destroy malignant cells and attack cancers resistant to X-rays. Beams are accelerated up to 70 percent of the speed of light and treatment time is shorter than other forms of radiotherapy.

BPT’s 400 MeV iRCMS is designed with intrinsically small beams that enable precise delivery of the most conformal radiation therapy. Its small beam sizes enable it to utilize small magnets and light gantries, creating a reduced footprint.

Along with BPT are Best Theratronics Ltd. (BTL), Best Cyclotron Systems (BCS) and Best Medical International (BMI), the other enterprises that make up TeamBest Medical Companies.

BCS currently offers New Advanced Technology Cyclotrons that range from 15 to 70 MeV with as high as 1000 micro Amp current for each device. BCS is developing a Multi-Particle 35 MeV Cyclotron that will utilize alpha, deuteron and proton power as forms of therapy.

TeamBest Companies plan to debut these technologies in express and mobile clinics linked to general and super-specialty medical centers as part of a Hub-and-Spoke Model of Healthcare Delivery System, set up in collaboration with the Best Cure Foundation.

“There are no challenges to bring this globally and in North America,” said Suthanthiran. “The cost of each treatment will be comparable to other external beam radiation therapies.”

TeamBest Companies are not the only manufacturer trying to maximize the potential of carbon ion therapy. Hitachi, for instance, recently acquired Mitsubishi’s proton, carbon and hybrid proton-carbon system technologies. RaySearch also just agreed to install a treatment planning system at a carbon ion therapy facility under construction in Japan.

BPT plans to release its 400 MeV iRCMS in two to three years' time.