How can women close the ‘diversity gap’ in imaging informatics? 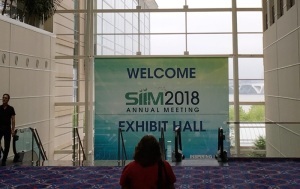 Women in the male-dominated field of imaging informatics need to go further than simply mentoring their female coworkers – they should also be their sponsors, putting their names forward for positions and helping to advance their careers.

This was just one of the suggestions that came out of a roundtable on strategies for closing the “diversity gap” in imaging informatics at the recent SIIM annual meeting in Maryland’s National Harbor.

“Mentoring is someone who gives you guidance and tells you what you should do,” Dr. Geraldine McGinty, an assistant professor of radiology at Weill Cornell Medical College, told the women gathered around several tables. “Sponsoring is when someone says, ‘Here’s this position, here’s this opportunity, I think you’d be great for it and I’m volunteering you for it.’”

The session, which was sponsored through an educational grant provided by Ambra Health, built on similar events held at last year’s RSNA and SIIM annual meetings. It is represented by the #RADxx hashtag on Twitter.

The conversations also centered on the challenges women face in wanting to be liked versus respected, and how to be assertive without being overly aggressive. Many women recalled the experience of bringing up an idea at a meeting and having it rejected, while the same idea put forth by a male colleague was enthusiastically accepted.

Dr. Katherine Andriole, director of research strategy and operations at the Massachusetts General Hospital and Brigham and Women’s Hospital Center for Clinical Data Science, suggested in those cases saying, “I’m glad you liked my idea.”

There was also discussion about how women are told to remove emotions from their conversations with colleagues. Christine Baran, operations manager for enterprise imaging informatics at Maine Health, said the keynote address by Dave deBronkart, who urged doctors to involve patients in their care, showed that emotions play a huge role in healthcare.

“I’ve been told that my opinions come across as fueled by emotion and you’re never going to be taken seriously unless you take the emotion out of what you’re saying,” Baran told the group. “Listening to ePatient Dave, the thing that drove him to do what he did was a highly personal, highly emotional connection to healthcare and IT. ... I think the best changes in any kind of healthcare industry, whether that’s imaging or not, are fueled by real experience. The best changes have the patient and their families in mind.”

Dr. Tessa Cook, chief of 3D and advanced imaging at Penn Medicine, who chaired the session along with Dr. Amy Kotsenas, a consultant in the radiology department at the Mayo Clinic, said the session was unique in that the discussion participants didn’t break themselves down by role, as they tend to do at other industry events.

“Our challenges and our experiences transcend our roles,” Cook told HCB News.