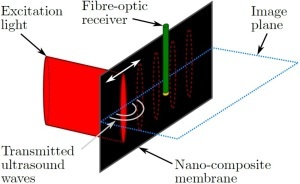 A new all-optical ultrasound may soon
enable simultaneous imaging for
MR and ultrasound
Simultaneous ultrasound and MR imaging has, up until this point, been impossible due to the dangers associated with exposing electronic components in ultrasound systems to the magnetic influence of MR.

But such a task may soon be a reality with the introduction of an all-optical ultrasound, the first to provide video-rate, real-time 2D imaging of biological tissue at a frame rate of up to three orders of magnitude faster than current optical systems.

“Advantages expected for applications range from routine bedside exams to image guidance of minimally invasive procedures,” Dr. Erwin J. Alles, a senior research associate at the department of medical physics and biomedical engineering at University College London, told HCB News. “The later application especially, where devices are considered disposable, will benefit greatly from the reduced costs of the all-optical technology and from MR compatibility.”

Conventional ultrasounds are composed of electronic transducers that transmit high-frequency sound waves into tissues, which send back reflections that are used by a computer to construct images.

However, the presence of these components prevents simultaneous imaging with MR platforms and creates challenges in the manufacturing of small ultrasounds for internal use, resulting in systems with large, handheld probes pressed against the skin. While high-resolution minimally invasive ultrasound probes are available, many are unaffordable for routine clinical use.

Optical components, in contrast, can be easily miniaturized and utilize probes that are significantly less expensive to produce. Its scanning mirror controls the transmission of waves generated by pulsed laser light and received by fiber optic sensors, increasing image quality and enabling image acquisition to take place across different modes, such as 2D and 3D imaging, on a single device.

This eliminates the need for highly specialized electronic ultrasound-based probes which can be highly disruptive and extend procedure time and risk to patients.

The lack of electrical parts allows the system to be safely used alongside MR scanners, providing clinicians with comprehensive pictures depicting tissues around areas of interest such as tumors or blood.

The generation of all-optical images has traditionally been a time-consuming process, relying on multiple optical source locations for the retrieval of data that is then combined to create a reconstruction of the area being imaged.
1(current)
2