HCB News: What plans do you have for the system in the coming months or years?

Our plans are to complete the safety study and receive approval to perform more extensive studies exploring the true potential of the applications we just discussed.

HCB News: Looking back from today to the beginning of the 10.5 Tesla MR project, what has been the most rewarding or surprising aspect of this endeavor?

The most rewarding aspect has been that 10.5 T appears to be poised to deliver our expected gains in sensitivity (i.e., SNR), and that many of the technologies we have been developing at 7T, with some modification are able to solve the difficulties encountered at 10.5 T. 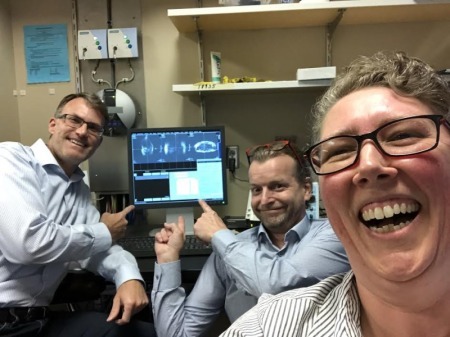 Funded by an $8 million grant from the NIH, the researchers at the UMN Center
for Magnetic Resonance Research are now conducting 10.5 T studies on the human body
As the research site that launched the 7T effort we pursued many of the fundamental studies aimed at understanding the RF interactions with human bodies at high frequencies, which are proving generalizable to 10.5T and likely even higher magnetic fields. With the promise of this system close to being realized, the most surprising aspect is the fact that it took so long to achieve from conception to first human studies (about a decade under development).