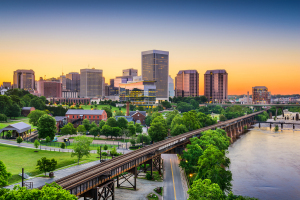 Healthcare groups are on a building spree in the Richmond, Virginia, area – to the tune of roughly $500 million.

“It’s going like crazy right now, especially here in Richmond,” Leslie Hanson, a principal with architecture firm HKS, who is director of the firm’s Richmond office, told the Richmond-Times Dispatch.

“It’s just amazing,” she told the paper, noting that her firm is “working closely with [Virginia Commonwealth University] VCU, which has a large presence and and whose efforts now are 'tremendous.'”

“Everybody is optimistic, but cautiously optimistic,” she added, observing that the construction in the region is bigger than just healthcare.

VCU Health System has an outpatient medical building underway for $350 million – slated for completion in 2020 – and more in the planning stages, including new inpatient plans in downtown Richmond.

It also has 114-bed, 212,000 square-foot rehabilitation hospital underway jointly with Sheltering Arms for $95 million, with a completion date in 2020.

And a third project, a VCU College of Health Professions building, aiming to bring various programs on its campus into a single, eight-story, 154,000 square-foot structure for $87.3 million, is set to be done in the fall of 2019.

Nor is VCU the only healthcare organization making construction moves in the area.

Health Corporation of America [HCA] Virginia’s Chippenham Hospital is expanding and rehabilitating its ER for about $22 million. It has a slated completion date of year-end 2019.

“We have a lot of traffic through there every single day. It really acts as pretty much the front door to our hospital. ... We have needed to re-engineer the space so that we are more efficient, so that we can care for our patients appropriately based on the level of injury or illness,” Greg Lowe, CEO of Chippenham and Johnston-Willis Hospitals, told the paper.

Also in the pipeline for HCA is an application to convert 16 medical/surgical beds at Retreat Doctors’ Hospital to psychiatric beds – with an approximate cost of $2.8 million.

HCA has also filed a certificate of need to add a CT scanner and an MR scanner at Johnston-Willis Hospital's new 40,000 square foot Brain and Spine Center.

“Our plan right now is to [move] vertically on two different towers. We can go up two more floors on each,” hospital CEO Chris Accashian told the Times-Dispatch.
1(current)
2