Canon hit with $32 million fine by EU for Toshiba deal

Canon hit with $32 million fine by EU for Toshiba deal 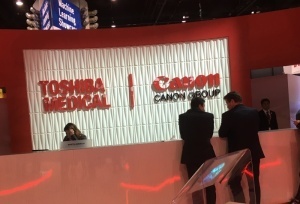 At RSNA 2017 Canon and Toshiba
exhibited side by side
Canon's extraordinary deal structure when it picked up Toshiba Medical Systems Corp. (TMSC) has now earned it a 28 million euro ($32 million) fine from the European Commission, Bloomberg reports.

At issue was a tactic dubbed “warehousing” that got around filing requirements, EU antitrust enforcers said in a statement.

"Companies have to respect our competition rules and procedures, said Commissioner Margrethe Vestager, in charge of competition policy, adding that companies “are obliged to notify and wait for our approval before a merger can go ahead.”

Of the warehousing he noted, “Canon structured a transaction to circumvent these obligations when they acquired TMSC. This is a procedural breach of our merger review so we are fining Canon €28 million. Our merger assessment and decision-making depends on the Commission being sure that companies are not jumping the gun and implementing mergers without our approval.”

The EU further broke down the manner in which Canon's warehousing broke the rules.

“As a first step, the interim buyer acquired 95 percent in the share capital of TMSC for 800 euros, whereas Canon paid 5.28 billion euros for the remaining 5 percent of the shares and share options over the interim buyer's stake. This first step was carried out prior to notification to or approval by the Commission.

“As a second step, following approval of the merger by the Commission, Canon exercised its share options, acquiring 100 percent of the shares of TMSC.”

This is far from the first objection incurred over the deal structure.

Earlier in June, the Canon-Toshiba deal earned the companies fines of $2.5 million each to settle U.S. federal charges that they violated premerger notification and waiting period requirements of the Hart-Scott-Rodino (HSR) Act with the unusual nature of the 2016 transaction

“The prior notice provisions of the HSR Act are designed to allow the agencies to analyze a proposed transaction before it is consummated to determine whether it will harm competition,” Bruce Hoffman, director of the Federal Trade Commission’s Bureau of Competition, said in a DOJ statement about the agreement, noting that, “deliberately structuring a transaction to avoid or delay HSR filing undermines the efficacy of the premerger notification process, regardless of whether the parties’ motives for doing so in a particular case were anticompetitive. We will be vigilant in seeking relief against attempts to circumvent the HSR Act’s filing requirements.”
1(current)
2