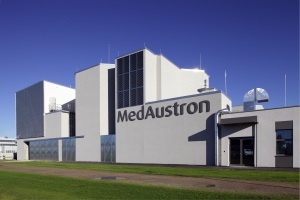 The procedure, which took place in early July, was performed on a patient with an adenocystic carcinoma of the left ear, and makes MedAustron the sixth center in the world to offer the advanced form of radiotherapy.

"We are excited and happy to announce our first successful treatment of a patient with carbon ion therapy,” Markus Stock, head of Medical Physics at MedAustron, said in a statement. “Our center started out with proton therapy end of 2016 and initially focused on increasing functionality for protons.
During the last year, we could finally focus on commissioning carbons.”

Carbon ion therapy applies a carbon ion beam to destroy malignant cells and attack cancers resistant to X-rays, while sparing healthy tissue. Treatment time for carbon ion therapy is shorter than other forms of radiotherapy due to its beams being accelerated by up to 70 percent of the speed of light when administered.

Irradiation is normally performed over five days a week over a period of several weeks for both carbon ion and proton therapy, though the former is considered superior due to being able to provide a higher biological dose of radiation that can be administered to the tumor to release more destructive power on it.

Delivery of the treatment at MedAustron is facilitated by a unique particle accelerator developed in close cooperation with CERN, and supported by a variety of software programs by RaySearch, which recently was chosen to replace all existing oncology information systems at MedAustron. They include the RayCare oncology information system for placing orders, the RayCommand treatment control system (TCS), and an additional RayStation system.

The setup currently consists of four irradiation rooms, three of which will be used for patient treatment and one for pure research, all of which are equipped with a robotic positioning and position verification system. The facility plans to make one room “fit” for the application and will soon place the third treatment space into operation.

The order is the single largest one to date for RaySearch, and is expected to be a comprehensive setup to EBG MedAustron GmbH and MedAustron International GmbH facilities.

"Particle therapy with carbon ions is one of the least available forms of therapy worldwide,” said medical director prof. Dr. Eugen B. Hug, in a statement. “Therefore, it is our declared goal and duty to intensify clinical research with these particles in order to create more evidence. We want to develop new treatment concepts and open up new indications.”

A number of practices and medical device manufacturers are exploring options for investing in carbon ion therapy. Hitachi, last October, installed its first ever carbon ion system at the at the Osaka Heavy Ion Therapy Center in Japan. In addition, the Yonsei Cancer Center in Korea announced this past May its intention to deploy the advanced radiotherapy treatment by 2022.

Therapy costs for both carbon ion and proton therapy are covered by the Austrian social insurance institutions.